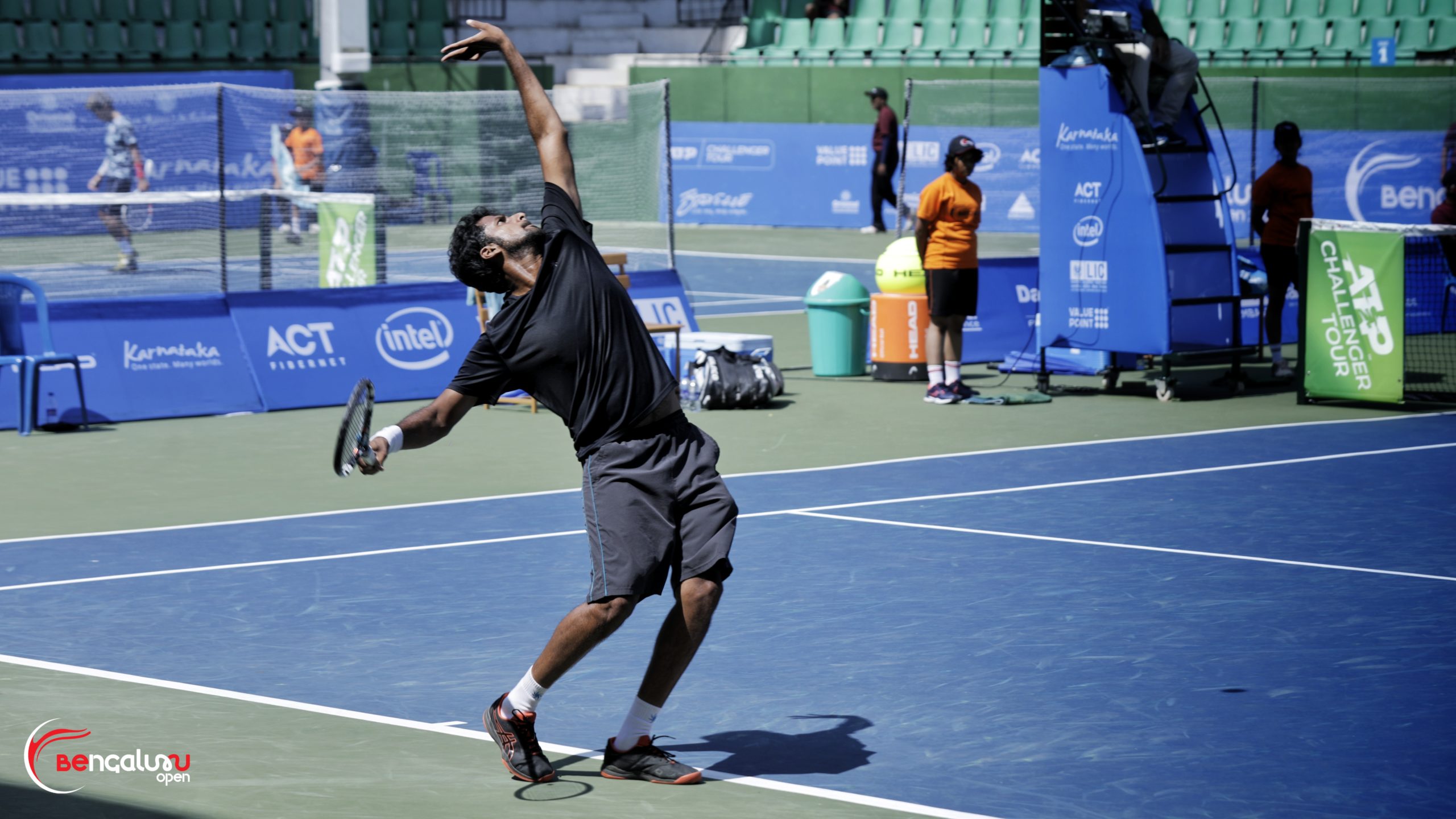 The Indian challenge in the singles event came to an end after all the six players including top-ranked Prajnesh Gunneswaran and Sumit Nagal, lost their respective pre-quarterfinal matches in the Bengaluru Open ATP Challenger Tour here on February 13.

Myneni, however, was the only Indian who gave a tough fight by stretching the match to the third set.

Down and out and very much disappointed, the Indian fans found solace and joy in the victory of Indian legend Leander Paes, who is in his last year of professional tennis calling it “The Last Roar”, stormed into the doubles’ semifinal with Australian partner Matthew Abden.

The pair trounced third seeds and champions of an ATP event last week Andre Goransson of Sweden and Christopher Rungkat of Indonesia 7-5, 0-6, 10-7.

Earlier, Myneni had combined with Matt Reid of Australia and won a hard fought battle against the top seeded pair of Cheng-Peng Hsieh of Taipei and Denys Molchanov of Ukraine 3-6, 6-4, 10-8 to enter the last four.

The other Indian pair – Purav Raja and Ramkumar Ramanathan – also reached the semifinal lineup. They clinched a straight set 6-4, 6-4 win over the Portugal-Serbian pair of Frederico Silva and Nikola Milojevic.

Much was expected from Prajnesh to beat Bonzi, as the match was considered to be a one-sided affair, but the later proved lethal to the Indian player.

“I was not comfortable coming into the match. I did not play as I wanted to. I am still trying to figure out what was wrong. I was just able to co-ordinate my movements. I wanted to play aggressive shots but most of the time I was defending. I should have broken him a little earlier in the first set. And after going 4-1 up with a down the line shot, I thought I was back into my elements. He still played well but I did not do anything to match him,” said Prajnesh after his exit.

Bonzi who is currently ranked 368th in the world broke Prajnesh in the second game of the first set but immediately lost his serve as the set was decided via tie-breaker.

The Frenchman did not give an error-prone Prajnesh a semblance of a chance as he closed out the second set in just 21 minutes with three breaks in the first, third and fifth. “I am very happy to reach the quarterfinal. It is difficult to control the ball here because of the altitude hence my only was to keep the ball in play as much as possible,” said an elated Bonzi.

Meanwhile, Italian Thomas Fabbiano had come with a reputation of having registered two epic wins in 2019 defeating World No. 6 Stefanos Tsitsipas to reach the 2nd round of Wimbledon Open and beating World No. 4 Dominic Thiem in the 1st round of the US Open, just last year. Today at the KSLTA, he did face some resistance from one of India’s leading player Saketh Myneni but eventually lived up to his billing of 9th seed here. The 30-year-old registered a 6-4, 5-7, 6-2 win to enter the quarterfinals of the US $ 162,500 prize money event.