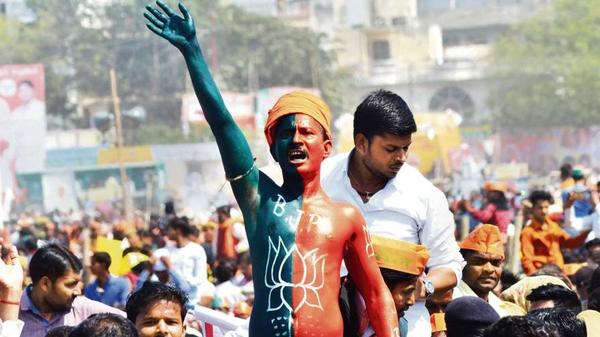 Delhi Debacle Maybe Setback For BJP, But Not Defeat Of Its Hindu Agenda

The Aam Aadmi Party, last week, swept the state polls by winning 62 seats and leaving only eight for the BJP in the 70-member Delhi assembly.

The Lutyens poll commentators have termed this electoral defeat of the BJP as a sign of its political weakness or the decline of its nationalistic project.

On the contrary though, the saffron party, has been carving out a Hindu constituency by embracing its Hindu nationalist agenda, which includes issues like CAA, Abrogation of Article 370, Ram Temple and others.

The party succeeded in this mission by warning the Hindu voters of Shaheen Bagh type anti-CAA protests in future if it was not voted to power. It termed such protests a threat to India’s integrity and protestors like Sharjeel Imam and AAP MLA Amanatullah Khan traitors and agents of Pakistan.

The proof of the consolidation of Hindu votes can be seen in Delhi election eve survey data of 2020, which was released by the Centre for the Study of Developing Societies, an autonomous social science research institute.

The 2020 data, compared to 2015 survey, shows an increase of Brahmin, Rajput, Vaishya, Punjabi Khatri and other upper caste votes for the BJP in Delhi election.

53 percent of the Punjabi Khatri’s voted for BJP, with an alarming increase of 20 per cent in comparison to 2015 and the other upper castes also saw a 12 per cent jump capping at 51 per cent.

Among other castes, Gujjars voted heavily for the BJP with 54 per cent, which was the highest surge in comparison to 2015.

As much as 15 per cent OBC votes, other than Jat, Gujjar and Yadavs, went to BJP. The Balmiki community registered a sharp 11 per cent increase in favour of BJP, though it was still low at 29 per cent.

Jatavs and other Dalits also recorded a 7 per cent hike, staying at 22 and 27 per cent respectively.

The overall Hindu votes saw a 9 per cent surge capping at 46 per cent.

Despite pacifying Sikh sentiments by punishing Sikh riots accused, the community votes for the BJP saw a 6 per cent decline. Muslims votes saw a marginal 1 per cent rise and the other minorities votes registered a fall of 2 per cent.

The nationalist agenda is paying rich dividends to the BJP as it is succeeding in transforming the Hindu mind to indefinitely keep the party in power by carefully excluding Muslims from its political messaging.

This process is compelling opposition parties to adopt BJP’s rhetoric and policies to stay politically relevant, unlike the Congress, which has pushed itself into obscurity over its pluralistic and minority politics.

AAP had backed abrogation of Article 370 and most opposition parties had welcomed the announcement of a Ram temple trust, which is to raise funds to build a Hindu temple at the location of the destroyed Babri mosque.

Israel-Palestine Conflict: Who Are Invaders? Arabs Or Jews?

Champat Rai is the epitome of sacrifice and dedication