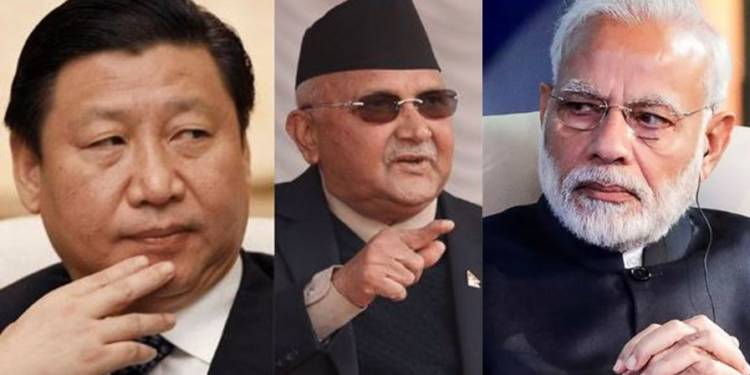 Nepal has surprised India by laying claim to territories on the border of Uttarakhand and north-western of Hindu nation and its Prime Minister K P Sharma Oli saying Indian virus (Covid-19) looks more lethal than Chinese and Italian.

Nepal, yesterday, had incorporated parts of India – Limpiyadhura, Lipulekh and Kalapani – in its revised official map.

This India-Nepal flare-up was fueled after India had published new maps to account for the creation of two Union Territories in Jammu and Kashmir and Ladakh. This annoyed Pakistan and China, which in all probability prodded Nepal to lay claim to Kalapani border area, which is close to Nepal-China-India tri-junction.

Reasons For Oli’s Rancor Against India

Political analysts, however, dismiss this border issue raised by Oli’s government an attempt by Beijing to deflect attention of Nepali people’s anti-China protests in Nepal to India.

Nepal has witnessed a series of anti-China protests in recent months over a slew of issues.

A protest was held against Huawei company for its involvement in the hacking of around 200 Nepali websites, including some important government websites.

Besides, there were protests against trafficking of Nepali women by Chinese nationals during the visit of Chinese Foreign Minister Wang Yi to Nepal between September 8 to 10, in 2019.

A section of Nepal Communist Party leaders also had expressed serious concerns over a big dam constructed by China at Arun River in Sankhuwasabha. They had expressed apprehension that Nepal’s territory could be submerged into water due to Chinese dam.

They also had alleged that the cause of floods in Province 1 and 2 was caused due to the Chinese dam as they had released water from it during the rainy season.

There also was much public outrage over bank frauds committed by Chinese nationals in July-August 2019, who had hacked ATMs of prominent banks like Nepal Rashtriya Bank and others.

The banks were forced to reduce the cash withdrawal limits from ATMs even in the festive season of Dashain thus causing much inconvenience to the public.

Another reason for Oli to divert people’s attention to India, is the growing discord in the ruling Nepal Communist Party’s top leadership.

Pushpa Kamal Dahal, called Prachanda, and NCP senior leader Madhav Kumar Nepal are determined on ousting Oli after he brought ordinances in an effort to secure his position as Prime Minister, by splitting the NCP and forming his own party. The ordinances, however, were withdrawn.

Even if Oli had succeeded in splitting the NCP or shied away from transferring party leadership to Prachanda, as agreed upon in a secret deal between the two leaders before merging their parties, it would have paved the way for future collaboration between former Maoists, Madhesi parties and the main opposition Nepali Congress, under the likely leadership of Prachanda.

This collaboration would work good for India as Prachanda could be kept under check by pro-India Madhes-based parties and Nepali Congress.

Another possible reason for Kathmandu’s sudden bellicosity could be Oli’s faliure to handle Chinese virus pandemic. He was in soup over his decision to import medical equipment from China to combat Covid-19.

The Health Ministry had awarded the contract without any competitive bidding to a private company run by Defence Minister Ishwar Pokhrel’s sons and Oli’s chief adviser Bishnu Rimal and Prime Minister’s IT consultant Asgar Ali.

Grave concerns were also raised over the price of the equipment and their quality in light of many European countries rejecting similar imports from China.

The Kalapani area in Uttarakhand’s Pithoragarh district has always been India’s part. India, in a statement, has indirecty blamed China for creating differences between the two countries.

According to 1816 Treaty of Sugauli, Kali river (now Mahakali) was demarcated as western boundary of Nepal. India claims the merging of the tributaries of the river as its origin, but Nepal claims that Lipu Lad, a rivulet that originates from the Lipulekh Pass and joins Mahakali later, is the actual Kali river.

Also, all maps of India in the past have depicted Kalapani within Indian territory.

The left-liberal cabal in India grabbed Oli’s remarks to build a narrative of India’s expansionist policies to keep in good humor their communist bosses in Beijing. They would not, however, see this issue going into their favour, because it is a non-issue, going by Treaty of Sugauli. Also, Nepali Army cannot be expected to patrol along India-Nepal borders like the PLA does.

Better for the eco-system to consider it as a non-issue, which was needlessly raked up by former foreign minister I K Gujral with a naive and altruistic set of guidelines to steer India’s relations with its immediate neighbours by accommodating all their demands, without asking for or expecting anything from them.

Nepal took full advantage of this misplaced “Gujral Doctrine” and raised Kalapani dispute. But, Narendra Modi is at the helm of affairs for now, who is a hard bargainer as also acknowledged by US President Donald Trump.

So, expecting far too much is foolishness