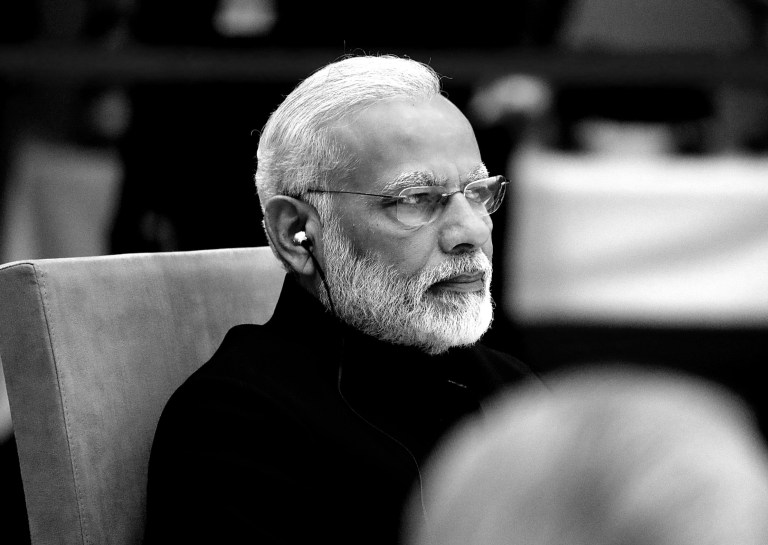 Received a hurtful post from an old friend and colleague. He was on my daily Broadcast list of WhatsApp. He requested that I do not send him any of my posts on ‘political’ issues.

I gave him a long explaination on why I write and what I write. But he was not convinced.

Being alerted by him thus, I felt I should clarify to all who read my posts on what exactly I think and do.

The charge against me is that I wrongly support our current Prime Minister, Shri Narendra Modi and that it establishes I am not rational and impartial anymore.

Let me try and explain. First and foremost, I do not write on ‘political’ issues. I write on ‘national’ issues. For example,

I have no opinion on whether Rahul Gandhi should be President of his party or not. Similarly, I have no views whether BJP is a better party than Congress or vice versa.

Even after 36 years in the IAS I have no MLA, MP or anyone involved in politics whom I can classify as my friend or even acquaintance. So, naturally

I don’t care which party wins or loses as long as the winning party runs an honest government doing good to my nation.

Now, why I speak in favour of Shri Modi:

1. Ever since the beginning of my service I realised that Planning Commission was not serving any useful purpose. I wanted it abolished. This PM did it.

2. I always felt that our tax structure is outdated. When I was posted as Commissioner, Commercial Tax in Bihar I understood the need for this even more.

I tried my own for some rationalisation. But that was just local tinkering. I was happy when VAT came. But GST was the best thing that could happen. So, I was happy.

3. I could never digest from my childhood Nehru’s decision to give a special status to J&K. Then as I grew up I heard the stories of corruption,

then pogrom against Kashmiri brahmins by these netas in J&K. Crores of rupees were being drained in J&K for nothing.

So when PM removed this special status and our MEA did an outstanding job in shutting up Pakistan and China on this issue, I was very very happy. बन्दे मे है दम I realised.

4. I used to feel extremely angry everytime Pakistan sent terrorists and killed our jawans. This PM taught those bastards a lesson by URI and Balakot mission and continued to kill these rats emerging from tunnels in Kashmir.

5. My family had suffered mentally, physically, psychologically, financially due to the partition of Bengal and subsequent ill treatment in east Pakistan.

Those non-muslims left behind in Pakistan, Bangladesh, Afghanistan, parts of ‘real’ India, had and are continuing to have, a miserable time on a daily basis.

PM brought CAA and gave them the loving assurance that India will take them back in the family. At last one man, Shri Narendra Modi understood our pain and suffering.

6. My constant worry was the weaknesses of our armed forces due to successive governments dilly-dallying in upgrading our defence technology, equipments, armaments.

This PM put that on a fast track. Not only that, he focused on developing infrastructure – roads, bridges, tunnels- in our border areas. I feel safe now. Earlier I was not.

7. Amarjit my friend has told me the tremendous amount of rural development work that has been got done by this PM.

Amarjit should know because he was the Secretary, Rural Development and now Advisor in the PMO.

8. I always felt that it is a shame that in certain parts of the country women have to walk miles to get water. The Water mission has been introduced to address this issue and results are showing.

9. Most news channels and news papers carry on a constant diatribe against Shri Modi. He does not react.

He showed extreme tolerance when for months together protestors blocked roads in Shahinbag. Same patience being shown in the farmers’ agitation. That shows democratic spirit.

Bharat Lal for his Water Mission, Shakti Kant Das as Governor, RBI, and various other officers in key positions are known for their integrity, brilliance and delivering capacity. It can’t get better than this.

11. He has chosen outstanding ex-civil servants as Ministers in his cabinet. My friend R K Singh is in independent charge of Power and MNRE.

Further proof of their humiliation came yesterday when Xi changed his army general which was obviously because the previous one got Xi and China humiliated by getting thrashed by our brave soldiers.

Now tell me. If whatever I have ever dreamt for my nation is being done by this PM what is my fault if I like and support him ? “

For the last 20 years we have been eating imported pulses.

Which Modi ji has cut 2 years ago and now has stopped completely due to Corona .. That is why it is now Rudali, agriculture movement is an excuse.

In 2005, the Manmohan government stopped subsidizing pulses in India according to a secret treaty.

Only two years later, a new government treaty was formed in which India would import pulses from Canada, Australia and the Netherlands.

In 2005, Canada opened a large lentil growing farm in which most of the Punjabi Sikhs were kept… .their organizations were first able to be Gurudwaras and then Khalistanis as managers.

So in 2007 there was so much production of pulses in Canada which was called Yellow Revolution.  Because their customers were agents of the mandis of India ..

Some of whom are Congress Punjabi families, Maharaja Patiala family and Badal family.

Today, the Modi agricultural policy has surgically blocked the income of all these brokers.

Now if India is no longer their market, then the amount of money that Canada and other countries have put on these farms [in their countries ..

It is not only wasted but unemployment and such a huge market of India went out of their hands.

The Congress is the biggest broker in this entire scam.

As we have seen CWC VP and CCP VP sign a deal in China for setting up trade, manufacturing in china. At the cost of Indian economy,  labor,  employment,  business just to share riches with its chamchas.

Gave crumbs to the poor thru  NAREGA

Modi ji is exposing one of their scams.  They are closing every door to their income.  …. Hi Toba, that’s about it.

That is why even Canada debates in its bill in Parliament and is threatening BJP to send its Khalistani villagers there to India.  Khalistani is the creation of Congress and the favorite of Pakistan.

The Home Minister also does not want to raise them because the Congress and others have not been fully exposed yet.

spread this message to every citizen of India.

So many skeletons are coming out of closet. Courtesy Mr Modi 🙏🙏

Impact of Biden as the President of the US on India and how the game is being played to weaken Modi ji. The crux of my long discussion with someone