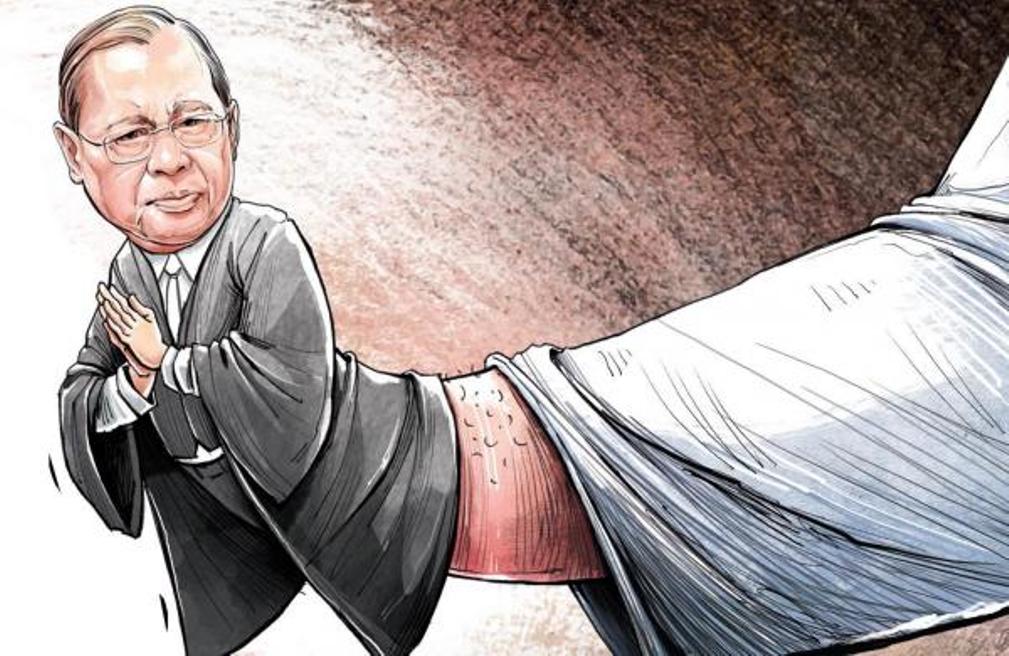 Today, former Chief Justice of India Ranjan Gogoi has endorsed what India Speaks Daily has been exposing all along since 2017, a lobby which holds judiciary to ransom and malign it in every possible way, if the verdicts are not in its favor.

In an interview to Time of India, Justice Gogoi said a stranglehold of half-a-dozen people hold judges to ransom and malign them in every possible way, if the verdicts are not delivered in their favor. He went on to say, “Unless this stranglehold is broken, judiciary cannot be independent.”

This is a very serious charge against the lobby. Not only this, Justice Gogoi indirectly said that the lobby was behind the holding of the unprecedented press conference of supreme court judges. They wanted CJI Misra to prepare a roaster according to their wishes to end the political career of the present Home Minister Amit Shah in Justice Loya’s case.

“I was the darling of the lobby when I went for the press conference in January 2018. But they want judges to decide cases in a certain manner and only then they will certify them as independent judges. I never entertained any feeling that there is sone expectation outside the court. I did and I do what I feel is correct, otherwise, I am not being true as a judge,” Justice Gogoi said referring to the four-judge presser.

Justice Gogoi said he has been slandered because he defied the lobby.

This lobby, though Justice Gogoi did not mention, had filed a sexual harassment case against him soon after the three-judge bench headed by him cleared NDA government in Rafale case.

This very lobby had pressed for impeachment of CJI Misra after he had refused the petition of Supreme Court judges, which had demanded an independent probe against Loya’s death to finish off Amit Shah, politically.

Though Justice Gogoi has not revealed names of the lobby, but India Speaks Daily shall mention their names.

First is the PIL lobby. Prashant Bhushan is its kingpin. The second is the foreign-funded NGOs’ lobby headed by led by Indira Jaisingh, Aruna Roy, Harsh Mander, Teesta Setalvad and others.

Third is the legal lobby led by Congress leaders and their supporters in the garb of lawyers and judges – Kapil Sibal, Abhishekh Manu Singhvi and Dushyant Dave, who fix the judiciary system, including appointment of judges, setting up roaster and getting favorable judgments. They give political shelter to clients belonging to their eco-system.

Fourth is the propaganda lobby run by the Lutyens media – The Times of India, Indian Express, The Hindu (all print), NDTV, India Today (TV), The Wire, The Qunit, The Caravan and The Print (portals). Some of the fake news machines are – Shekhar Coup-ta (Shekhar Gupta), Pranoy James Roy, Rajdeep Sardesai, Barkha Dutt, Arfa Khanum and Bakait Pandey (Ravish Kumar) to name a few.

In a fraud case, Justice Muralidhar, the lobby’s darling, passed an interim order, granting Neeraj Singhal bail, despite being informed that the apex court was seized of the matter.

Taking this into account, Supreme Court had disapproved Justice Muralidhar’s interim order by saying, “We may only observe that urgent mentioning of the case was made before the Bench presided over by the learned Chief Justice of India and hearing thereon continued after court hours on 29.08.2018. The matter was directed to be listed on the next day on 30.08.2018. Propriety demanded that the High Court should have showed deference and awaited orders in the present proceedings.”

“The haste with which the High Court was moved on the evening of 29.08.2018 at around 5:20 P.M. to implement its order, despite this Court being seized of the proceedings would indicate an attempt by Respondent No.1/Neeraj Singal to pre­empt the hearing before this Court by securing release. We express our disapproval,” the court said.

Singhal is accused of financial irregularities by the Serious Fraud Investigation Office, which alleged that he used to pay a substantial amount of salary to his employees in cash, particularly before the 2016 demonetisation of old Rs 500 and 1000 banknotes.

In another case, the lobby succeeded in setting aside August 28 order of the Chief Metropolitan Magistrate granting transit remand of urban naxal Gautam Navlakha to the Maharashtra police through their darling judge, Justice Muralidhar, whose wife Usha Ramanathan has a very a close acquaintance with the accused.

Navlakha is booked by Pune Police for his alleged Maoist links and several other charges following the violence at Koregaon Bhima.

In another case, anti-Hindu activist Teesta was granted bail by a bench headed by Justice Kurian Joseph on a “mere SMS from Sibal” in fund embezzlement case lodged by Gujarat police.

Justice Kurian Joseph is the same who questioned whether heinous crimes will stop happening after the convicts in the Nirbhaya gang-rape and murder case are hanged.

The lobby also succeeded in getting bail to urban naxal and wife of The Wire Founding Editor Siddharth Vardarajan, Nandini Sundar, in tribal man’s murder, soon after Congress came back to power in Chhattishgarh.

Shekhar Gupta, who went into hibernation after Augusta Westland case, has become active once again by publishing an article about Gogoi’s brother Air Marshal (Retd) Anjan Kumar Gogoi getting membership of the North Eastern Council, a secretary level post.

He is the same who had published a fake military coup article to spook Manmohan Singh and his Italian handler Sonia Gandhi.

In another case, the modus-operandi of the lobby came out in the open, when AAP leader Ashish Khetan had trained his guns at Shanti and Prashant Bhushan, who had rebeled against Arvind Kejriwal, for levelling baseless allegations against him.

He charged Bhushans of grabbing government lands and capturing houses, besides building the empire by making an industry of PILs.

Prashant Bhushan had alleged that Khetan, a former scribe turned politician, did a paid story, which benefited a private firm.

Gujarat High Court Judge and former Gujarat Lokayukta S M Soni had written a letter to the Chief Justice of India to keep Justice Alam away from Gujarat cases, for his communal bent of mind and backing Teesta.

Country men, the list is long. The battle India Speaks Daily has been waging, is coming out in the open. We have to take this forward. It is okay if they imprison us. We shall, thereafter, hit the streets.

Nevertheless, India Speaks Daily only expects that the Modi government uses the good offices of Justice Gogoi to clear the judicial cobwebs, which is anti-people, anti-poor and anti-India. This is necessary because people’s faith on judiciary is fast receding.

Let us all rally behind Justice Gogoi to bring to book the anti-India and anti-mankind lobby.

Covid-19 Vaccine – A Needle Of Deceit Or A Saviour?

Was The 2020 US Election Rigged To Deny Trump’s Re-Election?