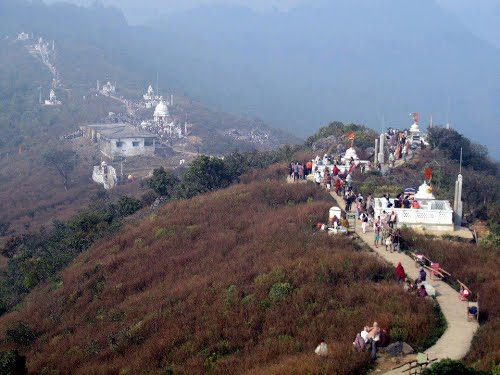 Hem Raj Jain: After snatching by ‘dadagiri’ of prominent Jain Teerth ‘Girinarji’ from Jains by Hindus in the State of Gujarat (of PM Modi of Hindutva forces) if Jains do not wake-up then their another prominent Jain Tirth ‘Palithana’ in Gujarat will also go away from Jains (as revealed at https://www.youtube.com/watch?v=x3paKepbuJk ). Hence  Jains should urgently launch a political party ‘Jain Sena’ patronized by Jainism also in view of ‘Sammed Shikhar ji controversy’ as given in short at https://www.pakistanchristianpost.com/opinion-details/4093 , and as explained below in some detail :-

Reference:- Acharya Pulak Sagar ji maharaj should know Jainism will get justice about their prominent Teerths (Pilgrim centers) only  through ‘Jain Sena’ by rule-of law and not by agitations (ii)- Self-defeatingly the agitations by Jains will trigger counter agitations by local tribes

In popular perception there are two religions which are based on non-violence namely Jainism and Buddhism  and people think that Jainism was started by Mahavir Swami and Buddhism was started by Gautam Buddh in about 6 th century B.C. OF course Buddhism was started by Gautam Buddh Who was almost contemporary of Mahavir Swami but Jainism was started by its founder (its First Teerthankar) Rishabh Dev and not by Mahavir Swami Who is 24th Teerthankar of Jainism. Which means that it is only Jainism which is the first and surviving non-violent religion of India / world . Hence out of the anger (born out of defilement by Indian State of  most prominent Jain tirth ‘Sammed Shikhar ji’ after snatching second most prominent tirth ‘Girinarji’ from Jains in PM Modi’s Gujarat)- whatever a prominent Digamber Jain Muni (saint), Pulak Sagar ji maharaj has said at – (https://www.youtube.com/watch?v=TKzebLz-jHA  ) as a veiled threat to the ruling establishment about the importance & power of Jainism even in today’s India / world – it is no exaggeration.

But if  Pulak Sagar ji maharaj is really interested in protecting the sanctity of main teerthas (Pilgrim centers) of Jainism then He ought to do the following:-

(1)-  Acharya Pulak Sagar ji maharaj certainly must be knowing that one can practice Jainism only by giving monopoly of violence & sanctioned physical coercion to State. Which means that without a properly functioning State,  Jainism has no meaning.

(i)- Jainism was started by a King hence it is the only religion which is based on the State (which is nothing but law in modern times and has the military as its main element). Because India doesn’t have adequate military power rather depends on military power of global political order of the UN sponsored by the USA hence the ‘Jain Sena’ (as proposed by  Pulak Sagar -ji maharaj which should rather be a political party patronized by Jainism) should ensure that Indian State protects not only national but international laws too (because in this age of unprecedented advance in modern science & technology globalization is inevitable which is impossible without global order).

(ii)-   Acharya Pulak Sagar ji maharaj wrongly took credit for Jains about Ram Mandir which is being constructed by the SCI by destroying rule-of-law which became possible due to un-Islamic cowardice of Indian Muslims who didn’t file proper petitions in the SCI as mentioned in my article https://www.pakistanchristianpost.com/opinion-details/4020  .  Hence Pulak Sagar ji maharaj now ought to  ensure the following

(iii)- To be launched ‘Jain Sena’ should immediately start its website where its constitution should be displayed committing itself to  secular democracy (necessary for free-mind without which progress in powerful modern technology and sciences including social sciences is impossible) rule-of-law,  international law and human rights.

(iv)- ‘Jain Sena’ should work (by ‘dharnas’ (sit-ins) at all the Tehsil / Taluka headquarters which will make ‘Jain Sena’  a formidable political force all across India because two third population of India is fully or partly dependent on farm-income and lakhs of farmers have committed suicide due to non-remunerative price of farm produce) for retrieving about Rs 1,000 Lakh Crore (45 % of Rs ~ 2,200 Trillion and rising) of Income Tax from About 1 million fake farmers as discussed in Parliament in April 2016 as reported at (http://www.newsnation.in/article/121125-news-nation-disclosure-on-blackmoney-kharabpati-farmers-take-agriculture-route-t.html  and

https://timesofindia.indiatimes.com/business/india-business/Prominent-people-hiding-taxable-income-Jaitley/articleshow/51408323.cms . This huge money should be used to provide legally enforceable prices for at least 40 agricultural produce through an expanded public distribution system and for other economic developmental activities of India

(2)- Acharya Pulak Sagar ji maharaj should also ensure that Jainism no more  refuses the entry of people from beleaguered Dalits (SC, ST) and backward castes in Jainism. The published commitment of ‘Jain Sena’ to rule of law & secularism (which will bring relief to disgruntled Indian Muslims) and entry of Dalits (SC,  ST) and backward castes in Jainism will ensure the support of more than  half of the population of India to ‘Jain Sena’ which is bound to bring electoral success to ‘Jain Sena’ in local body, States and National elections.because merely 31 % support base has brought BJP in power at union and in many States of India.

(3)- To protect the human rights of the people, the Jain Sena should work for two things:-

(ii) – Institutional mechanism in which military intervention from world body will also be sought by NHRC on the basis of reports of above tehsil NHRC offices, in case of serious human rights violations (such As massacre of innocent Sikhs in Delhi in 1984 and massacre of innocent Muslims in Gujarat in 2002 and gangrape with murder by upper castes of Dalit women, organized assault on weaker sections of society etc.).

[Without the above two arrangements ‘Jain Sena’ will not get the said support of more than half of the  harassed population of India].

(4)- ‘Jain Sena’ should also work for unification of India (mini-SAARC of undivided India plus Afghanistan)  by enforcing  legally / IoA expected plebiscite in united J&K and in Balochistan and by dual citizenship of India, Pakistan and Bangladesh to about 160 million Hindus / Sikhs and Muslims (and their descendants) who were illegally displaced during partition of India, as mentioned above and also by invoking ‘2011 Indo- Afghan strategic agreement’ as mentioned at https://www.pakistanchristianpost.com/exclusive-reports-details/233  ). ‘Jain Sena’ should also work for keeping China at its proper place by working for ‘independent Tibet’ under US- Jainism (in place of US-Buddhism which is not interested in ‘independent Tibet’) as mentioned at https://www.pakistanchristianpost.com/opinion-details/4090   and also for ending Ukraine war by working for a new participatory global body led by the USA after dismantling the UN) as mentioned at – https://www.pakistanchristianpost.com/opinion-details/4092   .(Because the existing UN global order has been destroyed by the Ukraine war and without a global order desirable globalization is impossible).

(5)- For propagating Jainism in the USA (For promoting the said US-Jainism , Pulak Sagar ji maharaj can first contact the organization of Jains in the USA through its website https://www.jaina.org/page/Execcommittee  . Moreover ‘Jain Sena’ will succeed in India only when it works on the basis of inner party democracy where every territorial office bearer (at local, city, Tehsil, District, Division, State, regional and national level with office in concerned territory with party flag and banner / board on it to facilitate party’s political interaction with people of the territory ) will be elected by territorial office bearers of one lower level (at local level by party members). At the same time, the election of party candidates should be financed by the party because elected representatives tend to work for those who finance their elections.

(6) The rule of law has no meaning if justice is not delivered promptly by the courts at moderate cost. Therefore ‘Jain Sena’ should work for and demand that the High Courts under their powers of  superintendence as per Article 227 of the Constitution should check every file coming from the subordinate courts (district and lower courts in appeals, revision writs etc.) if the Presiding Officer has unnecessarily given adjournments, alongwith  punishment to guilty presiding officers of subordinate courts. In addition to this a full-fledged / complete legal library as well as government accommodation and boarding (dining) facilities on nominal charges should be provided at all seats of appellate courts (under the supervision of Bar Council of States and Bar Council of India) for advocates coming from lower courts so that Cases in the appellate courts could be contested at a very low cost and under close watch of the litigants who have more personal contacts with advocates of their area who will go in appellate courts.

“[Every economically developed country (like the USA, China, Japan, UK, France, Germany, Russia etc.) works in its native language (so they are economically developed). So the said mini-SAARC  also (where most of its people speak / understand HIndi or its variants) if want to progress especially in crucial manufacturing sector then in all fields (including in science, technology, allopathic medicines etc.) will have to work  in Hindi with Devanagari script [except only for South India which in this case will be free to decide] (which also uses Hindi’s mother Sanskrit with Devanagari script in its majority religion Hinduism]. Punjabi, Gujarati, Marathi, Bangali etc. are Hindi variant languages and Urdu also uses the syntax/grammar of Hindi , so  if the said Mini-SAARC region (so-called Akhand-Bharat) uses Hindi/ Devanagari-script of Hindi, there will be no problem. This Hindi-language-policy will also empower the economically humble population of mini-SAARC which is in overwhelming majority and is losing economic battle in competition against those working in English. Moreover, the said policy has the potential to create the largest consumer market of about 190 crore people in the SAARC region which will also motivate South India to be friendly with Hindi]”.

It is hoped instead of giving impractical idea of taking up arms / ‘bhala’ (spears) in place of ‘mala’ (rosary) in the hands of Indian Jains,   Acharya Pulak Sagar ji maharaj and other religious leaders of Jains will ensure the urgent launching of political party ‘Jain Sena’ patronized by Jainism which will easily protect the sanctity of Jain Tirths and other interests of Jains by protecting / buttressing the national and international laws of India (which is the Indian State).