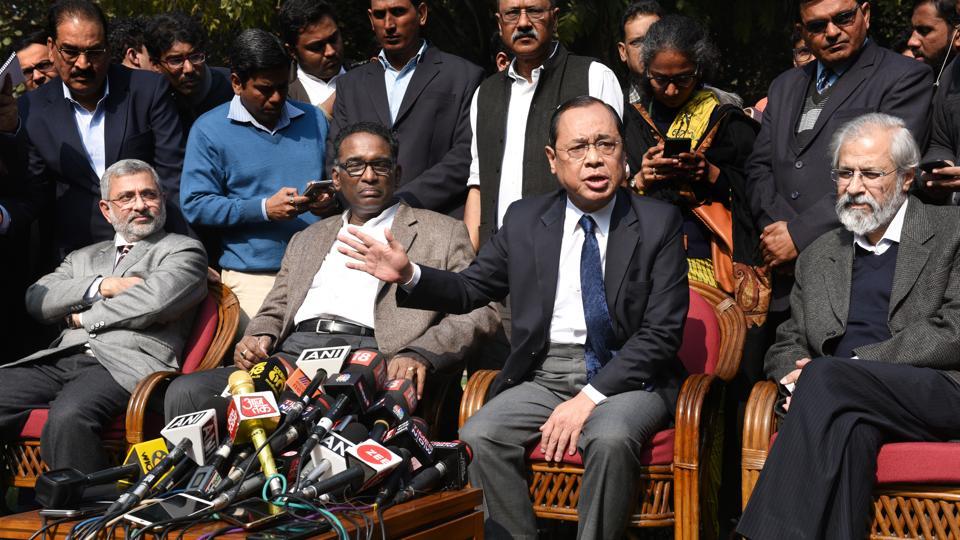 I, Utsav Singh Bains, the Deponent, do hereby solemnly state and affirm as under:

We are extremely concerned to note the complaint of sexual harassment and victimisation made by a woman employee of the Supreme Court against the Chief Justice of India. The charges are prima facie serious enough to warrant an independent inquiry by a high level independent committee.

The complaint also alleges arbitrary actions taken against the complainant, resulting in unprecedented victimisation that she and her family have been put through and continue to suffer after she rejected the alleged sexual advances. These include, the unjust termination of the services of the complainant, the suspension from service of her husband and two brothers-in-law, and her arrest on an apparently motivated FIR.

The act of the Chief Justice of India to constitute a special bench headed by himself to hear this issue on the judicial side, rather than constituting a credible and independent inquiry committee, goes against all just and settled principles of law. In the hearing, one-sided allegations were made by the Chief Justice and senior most law officers of the government. This is unbecoming of a judicial proceeding, especially one where the complainant in a sexual harassment case is absent and is permitted to be openly vilified in court. These actions augur a dark day in the history of the Supreme Court and have, undoubtedly, cast a shadow on the credibility of the Chief Justice and the judiciary.

We, therefore, call upon all the judges of the Supreme Court to  ensure that an independent and credible inquiry committee comprising senior retired judges and eminent members of civil society, headed by a woman, is immediately set up to inquire into this complaint.

It is imperative that the complainant be granted protection, so that her safety and security is ensured. In the meantime, since many of the witnesses named by the complainant are officials of the Supreme Court registry, it is incumbent on the Chief Justice to refrain from exercising any administrative powers during the course of the inquiry, since it would not be reasonable to expect officials under his direct administrative control to depose fearlessly.

This is a moment of grave crisis for the judiciary. If the Court is unable to credibly deal with this challenge, public confidence in the judiciary will be severely eroded.