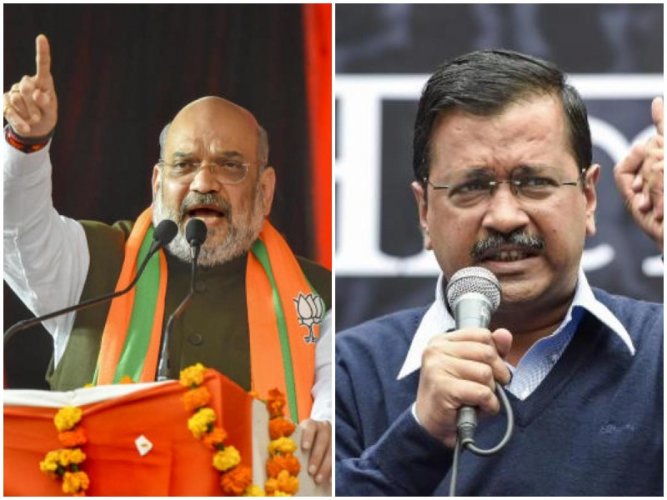 Slowly but surely, the electoral equation is shifting towards BJP in the run up to the February 8 Delhi elections, for which Arvind Kejriwal himself is responsible.

Until last week, many political pundits were giving thumps up to Aam Aadmi Party to register a thumping victory, which was riding high on freebie politics and publicity blitz.

On the other hand, the BJP had jumped into the fray with low confidence, which was enable to counter Kejriwal’s aggressive election campaigning.

The campaign energized BJP workers, especially when their confidence level was very low. The political experts had written off the party by claiming that it would only manage four or five seats, but for now, they are saying BJP could form the next government, if it continues to hold the same sway for the next few days.

Why am I saying this? It is because of the mistakes committed by AAP leaders including Kejriwal.

One of the biggest mistakes the party did was to stand with the people of Shaheen Bagh, who were protesting against Citizenship Amendment Act, to cash on Muslim votes, but their expectations vanished after it was hijacked by Jihadi activists like Sharjeel Imam, who talked about cutting of India’s chicken neck connecting the north-eastern states.

The speech has polarized voters, which is working against AAP.

AAP also expected that the protest would die down ahead of Delhi elections, but it did not, leaving the party helpless, because it could not ask the protesters to end their stir in fear of losing Muslim votes.

Related Article  Will The 'FIR Jihad' Meet Its Waterloo? Looks Like …

Hence, Kejriwal asked Shah to remove the protest, but it fell on deaf ears of Shah and Prime Minister Narendra Modi.

Another mistake Kejriwal did was to challenge Shah to visit any of the government school to show how he brought about a positive change.

Picking up the gauntlet thrown by Kejriwal at him, Shah exposed the reality of schools which had dirty toilets, muddy gutter water and broken roofs where students were studying out in the open.

He also exposed lack of teaching facilities in the schools. As many as 61 per cent of schools did not have principals and 45 per cent were bereft of teachers.

This aggressive approach of Shah has shaken Kejriwal’s AAP by giving an impression that the BJP is fighting to win elections in Delhi as Congress continues to struggle to find its relevance.

The BJP has played its cards very well by inviting NDA partners JDU and Akali Dal to campaign to woo a large sections of Purvanchali and Punjabi communities residing in Delhi, who hold key in poll results.

Nitish Kumar, Bihar Chief Minister and JDU leader, has a huge fan following among the Delhi Purvanchalis. In the last assembly election, his support to Kejriwal had helped him get Purvanchali votes.

Such is the popularity of Nitish among Delhi Purvanchalis. Uttar Pradesh Chief Minister Yogi Adityanath’s rallies also have played a stellar role in changing the winds of Delhi election. He has turned out to be a star campaigner with several BJP candidates requesting him to address rallies in their constituencies.

Yet another mistake which AAP did was asking ban on Yogi from campaigning, for giving provocative speeches. This demand before the Election Commission has sent a wrong message among voters that the party is on the backfoot and are afraid of losing.

However, there are two major roadblocks in the way of BJP’s success.

One is anti-party activities of local BJP workers and the other is women voters’ tilt towards Kejriwal’s freebie politics. This is the reason why Shah has hit a door-to-door campaign to curb local party workers.