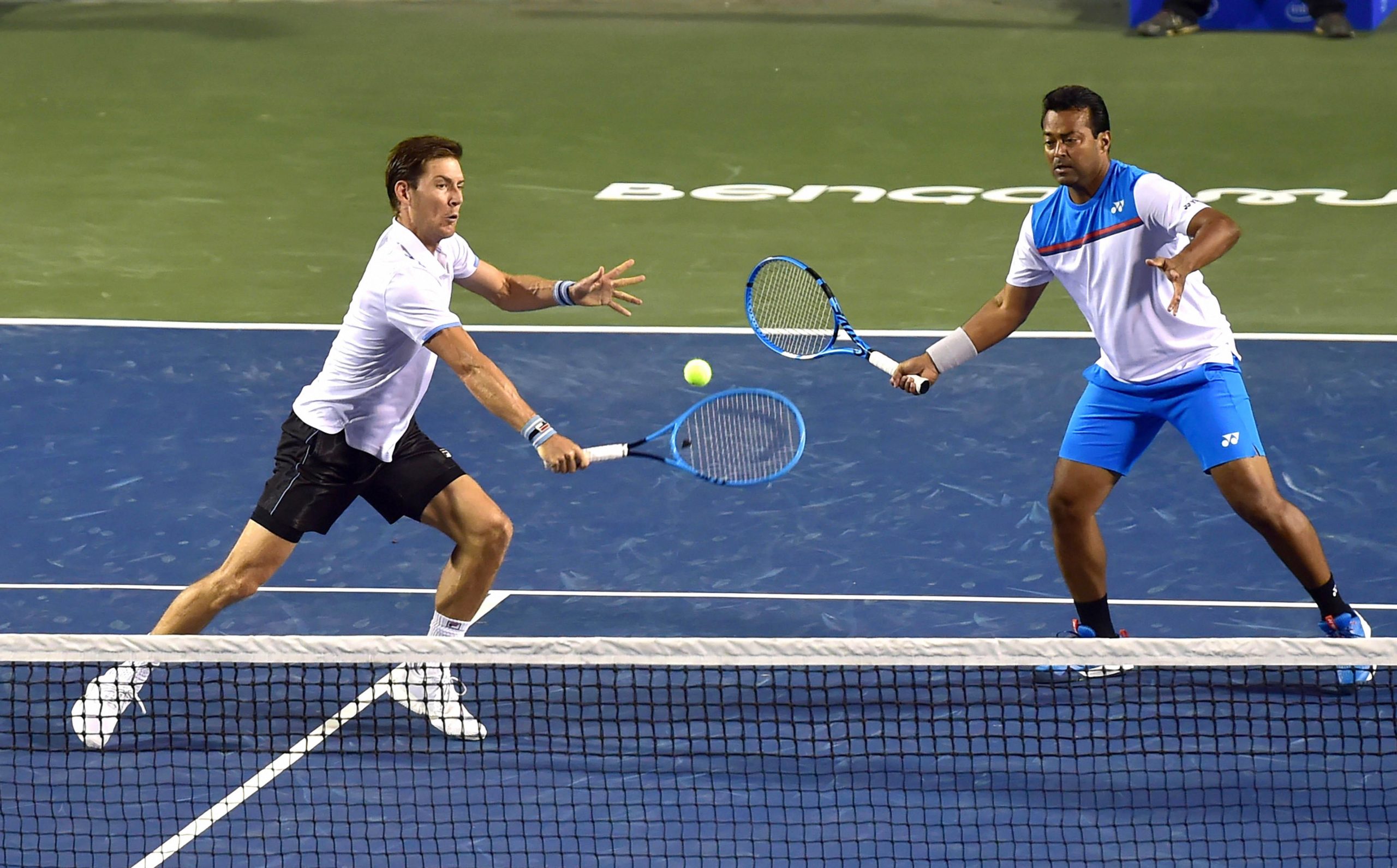 Veteran Leander Paes’ final ATP Tour match on home soil ended without a roar as he and his partner Matthew Ebden lost to fourth seeds Indian pair of Purav Raja and Ramkumar Ramanathan, in the men’s doubles final of the Bengaluru Open on February 15.

Though there were no bounds of happiness gleaming on the face of Ramanathan, he was sad at the same time, for seeing Paes on the loosing side. “It is always an honour to share the court with Leander. I am feeling sad after winning a Challenger that it had to have Leander on the losing side,” Ramanathan said.

“To win in tennis itself is tough. And winning is even more tougher when you have some big guns playing. We make a good team and know the strengths and weaknesses of each other and that is what helped us today,” the champion said.

The Indo-Australian pair were pulversied by all-India pair 6-0, 6-3 in just 56 minutes.

Paes and Ebden committed far too many unforced errors which helped their rivals to win a clean-sheeted first set. They almost did the same until they were down 0-3 and made a comeback, but was too late as they lost the decider 3-6.

The 46-year-old Paes and Ebden had stormed into th final after they beat third seeds Andre Goransson of Sweden and Indonesia’s Christopher Rungkat 7-5, 0-6, 10-7 in the semifinal.

Raja and Ramanathan, on the flipside, booked the last-four berth after Saketh Myneni and Matt Reid of Australia conceded the other semifinal match.

Meanwhile, the journey of Bonzi enroute to the title round is no short of a fairy tale script.

First he quelled the challenge of Manish Suresh Kumar in the opening round and felled 12th seed N Milojevic in the second round before sending the seventh seed and India’s No. 1 Prajnesh Gunneswaran in the third round.

He also sent the third seed Yuichi Sugita in the quarterfinals before ousting second seed Stefano Travaglia to earn a berth in the final of the US $ 162,500 event.

After a good start, Bonzi lost his serve in the fifth game but immediately returned the favour. With one more break in the eighth game, Bonzi served out for the set. In the second set, Bonzi, flirting with break points, finally managed one in the seventh game which was enough for him to pave the path to victory.

The other semifinal went according to the script with the fancied fourth seed Australian James Duckworth setting aside the challenge of Italian Julian Ocleppo who started with a wrong foot losing his serve.

The Australian had eturned to the top 100 in singles ranking last year by winning four Challenger titles in six final appearances. Although Ocleppo did a great job of hitting some good returns, he was not able to achieve a break.

On the contrary in trying hard, lost his serve and the set in the ninth game. The second set followed a similar pattern where Duckworth broke Ocleppo’s serve in the second and eight games to wrest the match.