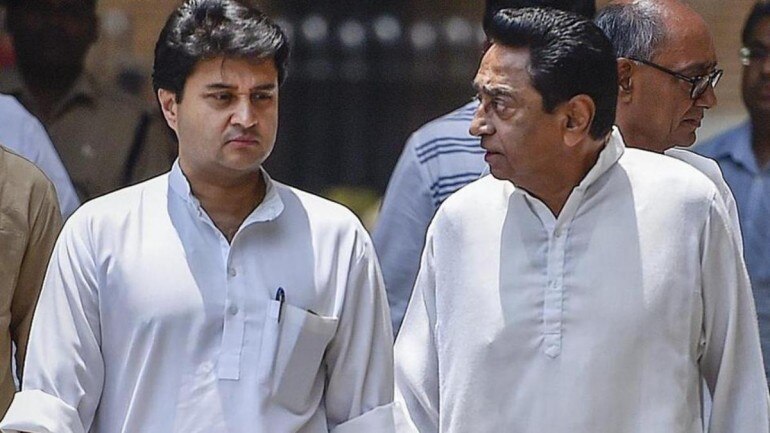 MP Drama Is Nothing, But Scindia’s Posturing To Gain RS Entry

Of course one cannot deny horse-trading in Indian politics, because all political parties play on the principles of saam (achieving means by willingness or acceptance), daam (bribe), dand (punishment) and bhed (division).

Having said that, the blame for JDS-Congress government’s fall in Karnataka squarely rests on Siddaramaiah and the disgruntled MLAs, belonging to both coalition parties.

Ultimately, the inter-party bickering exploded, that resulted in rebel MLAs tendering resignations, but not before having fought a pitched battle in the supreme court.

Same bloody soundbites are being heard in Madhya Pradesh once again, following the reports of 8-10 MLAs having gone missing. The Congress, led by Digvijaya Singh, is sounding like Siddaramaiah, training guns at BJP for luring the MLAs to bring down the Kamal Nath government in Madhya Pradesh.

The script is similar to Karnataka’s. The fight is between Digvijaya Singh and Kamal Nath, the old guards, and young turk, Jyotiraditya Scindia. His supporters are frustrated and angered with the old guards for sidelining their leader.

Thereafter, the old guards managed to keep Scindia away from state politics by prevailing upon the Gandhis. The High Command gave him tasks like campaigning for Lok Sabha elections in Maharashtra.

This frustrated him as he was eyeing for MPCC President’s post, but the old guards swa in him an obstacle for the growth of their sons – Jaivardhan Singh and Nakul Nath.

Getting restless for not getting a good role in state and national politics, Scindia, soon after losing Lok Sabha seat from Guna, raised his voice against Kamal Nath government by threatening to go on protest for not meeting party’s promises made in its state election manifesto.

Besides this, Scindia also raised the clamour for Rajya Sabha seat, but is looks difficult for him to get Gandhis nod, amidst reports of Rajiv Gandhi formula doing rounds. The formula denies defeated MPs contesting Rajya Sabha election.

Also, both, Digvijaya Singh and Kamal Nath, managed to prop up Priyanka Gandhi’s name to contest Rajya Sabha election from the state, sending a strong message to Scindia supporers of sidelining him.

Keeping this in mind, it appears, that the latest round of political turmoil in Madhya Pradesh is nothing, but a pressure tactics by Scindia for contesting Rajya Sabha election.

The Congress is set to win two of the three Rajya Sabha seats on account of the increased number of members in the Madhya Pradesh assembly following its victory in 2018 elections. The BJP, on the other hand, will manage to retain one of the two seats it currently holds.