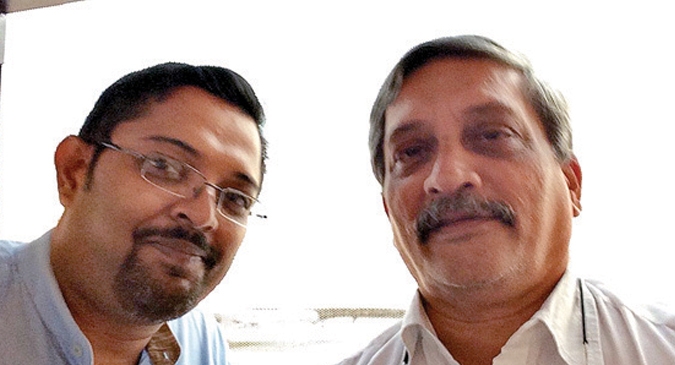 George Soros, who is hated the most in his native country, had committed $1 billion towards fighting nationalism and nationalists, at Davos in his speech at the World Economic Forum (WEF).

Soros, based on the lies perpetrated by doodly-boodly picklie journalists across the globe for few dollars, had accused Prime Minister Narendra Modi of creating a Hindu Rashtra.

India has always been a Hindu Nation, but never felt it mandatory to declare it so.

Soros attack on Modi is nothing but an attempt to break India into pieces by misleading Muslims on Citizenship Amendment Act. That shall remain a dream, for, he after all, is a civilised anarchists, not barbaric Aurangzeb and Babur, who tried to De-Hinduise India.

If anyone tries to commit this mistake, the sons of this great nation would stand up to clear the lie. One such son of India is Founder and Editor-in-Chief of Goa Chronicle, Savio Rodrigues, who wrote an open letter, hitting out on Soros for insulting India.

You are a liar Mr George Soros.

At Davos you decided to insult my motherland, my nation with half-baked information aimed at creating a discord between the Hindu and Muslim community in India that have been living for centuries in unity and harmony.

Your intent was an indulgence in fear-mongering and to lie to the Muslims in India that they are under threat from the Hindus because it is led by a political party and a political leader reportedly from a Hindu nationalist party. In the last six-years of Narendra Modi being the Prime Minister of India, I have seen the government work more for the welfare of the Muslims and Christians than the Hindus.

Mr Modi has stood for a united India and has been working towards a resurgent India globally.

At Davos in front of representatives from over 65 countries in the world, you said: “Nationalism, far from being reversed, made further headway. The biggest and most frightening setback came in India, where a democratically elected Narendra Modi is creating a Hindu nationalist state, imposing punitive measures on Kashmir – a semi-autonomous Muslim region, and threatening to deprive millions of Muslims of their citizenship.”

The entire statement made by at Davos, Soros is a lie. I as an Indian belonging to the Christian, which is considered by some in India, to be more of a minority than the Muslim community, can unflinchingly and proudly tell you that there is no better place in the world for people of different religious beliefs to exist other than India.

I am sure you know that most of the Islamic nations you support clandestinely follow a theocratic form of governance and administration where other religions are not free from fear of being targeted for their religious beliefs.

In fact recently you met with the Prime Minister of Pakistan, Imran Khan. I am sure you would be aware of the persecution of religious minorities in Pakistan in particular of the Hindu, Christian and Sikh minorities. The presence over the years has dropped to less than 2 per cent. The minorities in Pakistan have been attacked, raped and forced to convert to Islam. But that would not bother you because in you’re left leaning thoughts, that is an excepted evil of governance in Islamic countries and left-wing ruled nations.

India on the other hand has seen a rise in Muslim minorities over the years. You do not find Hindus undertaking violent conversions of Muslims in India. In fact it is the Muslims and Christians that have been unlawfully indulging in mass conversions of Hindus.

You bring in Kashmir into your discussion. The organisation you fund Open Society Foundation has been subtly fuelling the thought of a Free Kashmir. It has even conducted programs for solving the Kashmir crisis. Their idea of solving Kashmir is blaming India, Indian Army of untold atrocities and freeing Kashmir from India. That however is not going to ever happen. No Indian will let go of Kashmir.

So let me correct you, because your statement clearly proves that you are either ignorant of the facts on the issues in Kashmir or you are deliberately painting a gory picture to suit your diabolical interests of fear-mongering and creating a Hindu – Muslim divide in India.

I visited Kashmir post the Abrogation of Article 370. It was the first time I visited Kashmir. I was sad that, we as Indians, being inattentive, allowed for the Islamic radicals to brainwash our people in Kashmir. That for years they believed that they were superior to other than Indians because they were Kashmir Muslims, especially after the violently threw the Kashmiri Pandits out of Kashmir. The political leaders in Kashmir were crooks and autocratic and they were complemented with crooks and autocratic political leaders at the Indian government at that time.

Such was the hate fuelled in Kashmir over the years by Islamic radicals prompted by Saudi Arabia, Pakistan and Turkey that the Kashmiris Hindus, 30 years ago, faced a horrific genocide and had to flee Kashmir over night.

The Kashmiri Hindus continue to fight for their rights to return to their homeland; successive Indian governments have failed the Kashmiri Pandits in taking up their case and giving them justice. The Narendra Modi government has taken the first step through the Abrogation of Article 370.

If you, George Soros, had an iota of knowledge on the history of Kashmir, you would know that Kashmir is not a Muslim region but actually a region of Hindus, Sikhs and Muslims.

Have you or the organisations you fund such as Open Society Foundation ever spoken or advocated for the rights of the Kashmiri Pandits that were ostracised from Kashmir and their homeland. You have not. And therein lies you hypocrisy.

You mention rather stupidly in your speech that millions of Muslims will be deprived of citizenship. Let me rebuke your stupid statement with some facts. No Indian Muslim has or will ever be deprived of their rights as a Citizen of India, because to us, they are Indians. They are our brothers and sisters. More importantly most Indian Muslims consider themselves to be children of India.

Of course you will have some Indian Muslims who have been brainwashed by the Islamic radicals and people like you that fear-monger to create chaos in nations for business benefits and cry that they are in danger in India. But strangely their democratic rights continue to be respected. That’s why even after the Citizenship Amendment Act has been passed and some Indian Muslims have been on a riot and arson violent rampage in India; they have been tolerated.

Sometimes in a family, you will have a brother or sister who could go astray due to peer pressure. But as the Holy Bible states, we must not judge the prodigal son but accept them with their weaknesses.

However those Muslims from Pakistan, Bangladesh and Myanmar who have been illegal living in India, will be thrown out without a doubt. It will be foolish on the part of India to keep such dangerous and anti-national immigrants in our secular nation.

My honest advice to you George Soros is to stop meddling in the affairs of India. I know you have been funding several left-leaning NGOs who have been constantly attempting to create chaos in India over several issues only because the Indian government is led by a man like Narendra Modi who puts nation first over any global pussyfooting.

I earnest appeal to the Indian government to take stern action against your lies on an international platform. Your own history is dubious and crooked, so please do not point fingers at my India, because there are many fingers pointing at you back and the crooked people in governments you back.

Your plan to fund the destruction of nationalism in India is a joke. I would like to advice you to spend your money wisely because you will lose in this dream of yours to destroy Nationalism in India. We Indians are proud of India. We are also proud of our Hindu roots. This after all Hindustan. We are all culturally connected to the roots of India because we are all Hindus. But you will not understand this simple thought of an Indian. For that you need to belong to one motherland. You George Soros have only one mother and that’s money not motherland. You will sell your biological mother, if you can make money.

India is a nation of Sanatan Dharma. Our restrain must not be considered to be cowardice or slumber. It is not far, when the Indian and International lobby, some funded by you, working against the interest of India will face the wrath of the people of India. It will be difficult for you or your organisations to do business in India.

Don’t insult our Mother India. We Indians do not take that lightly.

even Jawaharlal Nehru had wanted Indian citizenship for religious minorities from Pakistan as he hit out at the Congress while defending the amended citizenship law.

Replying to a debate on Motion of Thanks to the President’s Address, he said the first prime minister of India (Jawaharlal Nehru) wrote to the first chief minister of Assam (Gopinath Bordoloi), saying there was a need to differentiate between Hindu refugees and Muslim migrants.

He said Nehru had wanted to defend minorities in then West Pakistan and East Pakistan (now Bangladesh). “Was he communal, did he want to create a Hindu Rashtra. I want to ask the Congress,” the prime minister said.

He said Nehru was a big thinker. Why did he not include all citizens but mentioned only religious minorities in the Nehru-Liaquat Agreement? Modi asked. Liaquat Ali Khan was the them prime minister of Pakistan. He said that his government is saying today what Nehru had said decades ago. Modi said the government was fulfilling the wishes of the founding fathers.

While referring to the Citizenship Amendment Act, President Ram Nath Kovind in his address to the joint sitting of Parliament on January 31 had said that Mahatma Gandhi was in favour of bringing back religious minorities facing persecution in Pakistan.

Participating in the debate on the Motion of Thanks, Shashi Tharoor of Congress had said Mahatma Gandhi was only partially quoted by the government to defend the amended law.