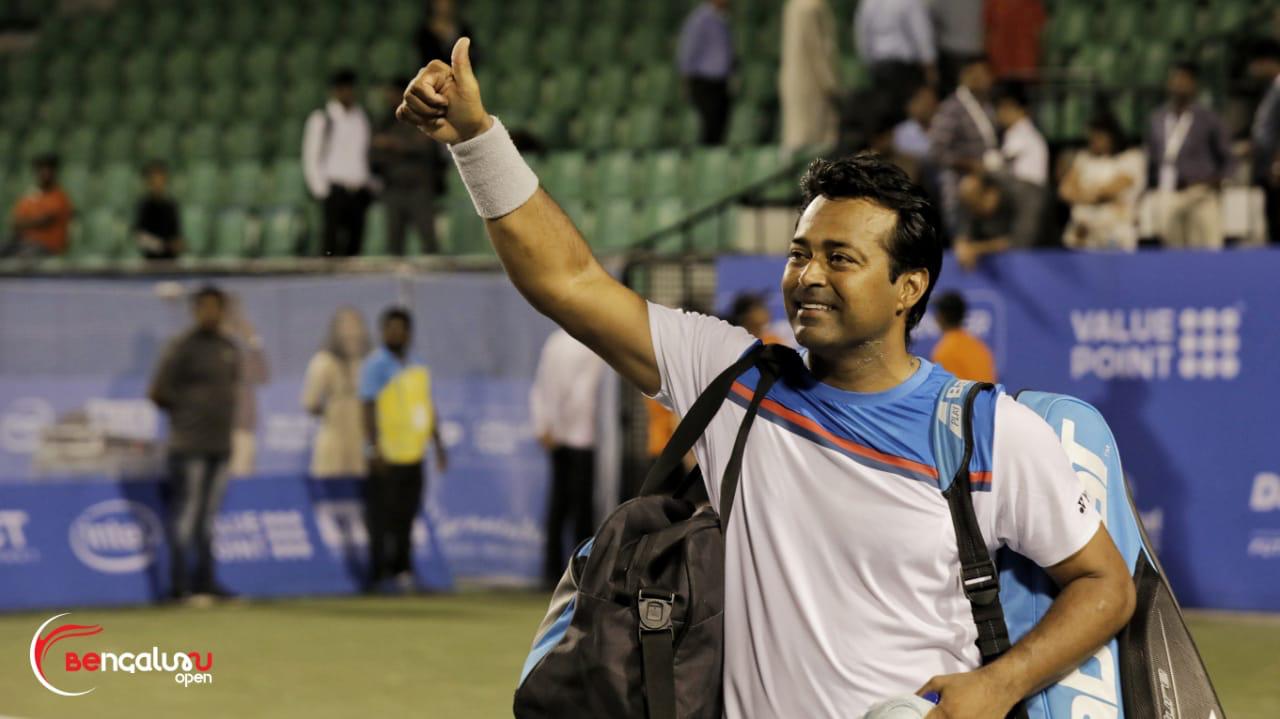 A crowd of near-full capacity cheered the Indian tennis legend Leander Paes as he walked into the stadium for his warm-up, minutes before his first round of doubles match of the Bengaluru Open 2020.

The aura of Leander Paes spread beyond the Cubbon Park where KSLTA is located as all roads seemed to lead to the venue where, the 18-times Grand Slam Champion and Olympic medal winner Paes, in all probability is playing his last ATP event on Indian soil.

Earlier in the day, his Australian partner Matthew Abden had lost a grueling three setter, each one decided via tie-breaker, to his Egyptian rival Mohamed Safwat in the longest match of the event thus far which lasted a little over three hours.

His tiredness seemed to have vanished under the shadow of Paes’ presence so much so that he looked to be the dominant partner amongst the two as the duo advanced to the second round with a 7-6(2), 6-4 win over the Slovenia-China combine of Blaz Rola and Zhizhen Zhang.

Meanwhile, Indian’s top ranked player and defending champion Prajnesh Gunneswaran, seeded seventh here, was stretched by Sebastian Fanselow of Germany enroute to the quarterfinals of the US $ 162,480 prize money event as three seeds were shown the door at the KSLTA on Wednesday.

The other Indians to advance into the next rounds were 17th seed Ramanathan Ramkumar who quelled the challenge of the qualifier Abhinav Shanmugam with a 6-1, 6-3 win and Sidharth Rawat who beat Lucky Loser Rishi Redyy 6-2, 6-2.

Meanwhile Italian Julian Ocleppo ousted 10th seed Zhizhen Zhang of China in straight sets 6-1, 6-3 while Frenchman Benjamin Bonzi sent home the 12th seed Nikola Milojevic of Serbia with a 6-4, 6-1 victory. The last seed to bite the dust was 15th seed Kimmer Coppejans of Belgium who went down to Frederico Ferreira Silva of Portugal 3-6, 6-3, 5-7.

Prajnesh who achieved a career high ranking of 75 last year, riding on a spate of good performances which included making the main draw of all the four Grand Slams, took time to settle in his quest to defend his title. Playing against the German who is ranked more than 400 rankings below him, a break in the fifth game gave him the advantage as he once again broke him in the seventh before clinching the opener 6-2.

The 124th ranked Indian should have settled the issue in the second after going 3-1 up with a break in the second game. However, a couple of unforced errors added to his woes as he lost his serve in the sixth and 10th games to lose the set 4-6.

In the decider, both tested each other’s forehand to the maximum and held their respective serves until the seventh game where the German lost his serve, which was enough to set up a win for the Indian who served out for the match.

“The tag of the defending champion did not have an effect on me as it has been more than a year,” said Prajnesh. “Although I committed a few mistakes, which were not necessary, I am playing well and look forward to carrying on the form,” said the 30-year-old from Chennai who is currently ranked 124th in the world.

Clinic for juniors: A clinic for junior tennis players will be conducted on Friday at 4 p.m. by a few top players playing here at the Bengaluru Open where the kids can learn the finer tricks of the trade while assimilating the rich experiences of the established players. This is an initiative by KSLTA to give an opportunity to the budding tennis players to interact with some of the best players.