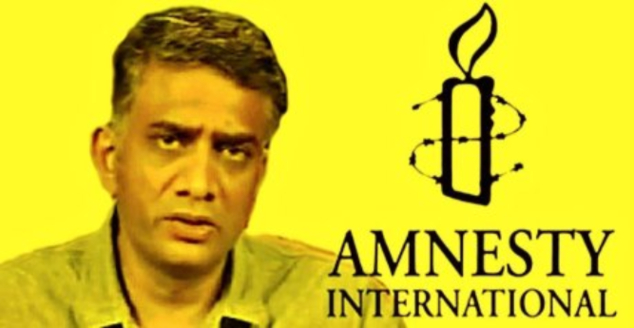 A FIR has been registered against former journalist and Amnesty International India’s Executive Director Aakar Patel for provoking and instigating Muslims on social media to organise US-like protests against George Floyd killing across India.

The killing of African American George Floyd by a white police officer in Minneapolis had led to nationwide protests, which turned violent in many parts of the US.

The protesters have been on a rioting spree by attacking police officials, torching police vehicles, looting retail stores and burning down houses and public places, including historic places.

Several left-liberals have been calling for similar violent protests by Muslims in India, which has forced security agencies to take cognizance of posts encouraging US-like riots in India.

Reacting to the case filed against him, Patel told the media, “I don’t think the case should have been registered. I don’t think it will go anywhere.”

That is his personal reaction, but many Indians are already debating whether it is time for the Indian authorities to punish him or his organisation for not only inciting riots, but also for committing fraud.

Republic TV in September had exposed Amnesty India’s fraud. The organisation had received Rs 51 crores towards export of services. However, no documentary proof of the export like invoices has been submitted so far.

Investigation revealed that in the name of export of goods and services, Amnesty India was publishing half-baked reports on Kashmir, which were pre-decided through a signed agreement.

Not only this, Amnesty India is also accused of painting jihadi elements as heroes and terror victims as perpetrators of terror. It called Urban Naxal Arun Ferreira as a human rights crusader. Ferreira is accused of plotting Prime Minister Narendra Modi’s murder.

Its parent body, Amnesty International, is also accused of promoting Taliban supporters like Moazzam Begg, who was picked up by CIA in 2002 after fleeing to Pakistan. He was a member of al-Qaeda, who recruited jihadis and funded training camps.

It is also accused for promoting bigoted casteist remarks, though Amnesty India claims to work for curbing violence and granting dignity to people across India. One of its associates had advocated violence against Brahmins.

The organisation had roped in actor Naseeruddin Shah to influence the results of 2019 general elections. Shah, in a video, had lied about the Constitution being under threat and dissent being suppressed in India.

Amnesty is also accused of making a woman employee sign a Non Disclosure Agreement to settle an equal pay dispute in the UK.

She was forced to sign a gagging agreement after dropping a discrimination claim after objecting to her salary because a male employee was earning £4,000 more a year for essentially the same job. This is contrary to the campaigns which it runs calling for women’s rights, gender equality and equal pay.

Amnesty is accused of toxic working environment, which was exposed by KonTerra Group and a group of psychologists, following the suicide of two staff members. They discovered that the Amnesty management bullied and humiliated their employees as punishment.

Taking into account anti-India activities and offences of Amnesty and its head, it is time to take action against them, because India cannot afford to face US-like violence when it is facing coronavirus pandemic and war-like situation at its Pakistan and China borders.