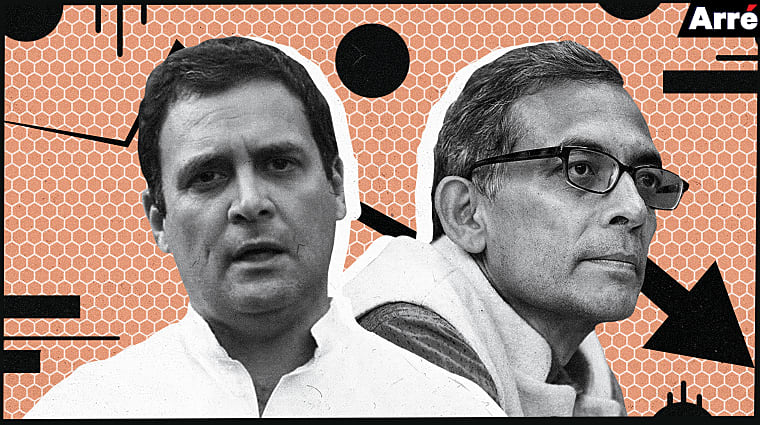 Rahul Embarrasses Uddhav Govt In His Chat With Abhijit Banerjee

The Congress have hit upon a plan to pep-up Rahul Gandhi’s battered image by holding a series of conversations with intellectuals. The purpose is to rebrand Rahul Gandhi’s pappu image and present him as self-thinking leader, who can be a credible alternative to Prime Minister Narendra Modi.

The interaction with luminaries is not a bad idea, but Rahul Gandhi’s depth in the subject matters get exposed beyond repair and most of the times, lands his own leaders and state governments on self-defeating turfs.

Sample a bit of conversation between him and Nobel laureate Prof. Abhijit Banerjee where the economist disagrees with Rahul Gandhi’s push for decentralisation during Covid lockdown, putting Congress-backed Uddhav Thackeray government in an embarrassing situation.

“This is a place where you don’t want to decentralise because you want to actually aggregate the information. If this is a population of people who were very infected, you don’t want them to be moving through the whole country. I feel this is a place where we should have tested people where they are allowed to board a train or something. That is a central question and something that only a federal government can do,” Banerjee said.

The conduct of the Maharashtra government has been the worst, so far. The Uddhav government had come in for a lot of flak for charging migrant workers for their train travel and health check-up.

Rahul Gandhi, yet again, was disappointed when Banerjee made his views clear on MGNREGA and Right To Food when he said these policies were inadequate.

“I think these are kind of separable in my view. In the sense that I think the real problem in the very short run is that these good policies put in place by the UPA are inadequate. And the government in a sense absolutely embraced them.

Such conversions are good, but not enough for the Congress to address Rahul Gandhi’s leadership deficit. To become a mass leader, it is necessary for the Gandhi scion to inspire party workers and lead from the front.

Is The Q Plan Unfolding To Save Trump’s America?