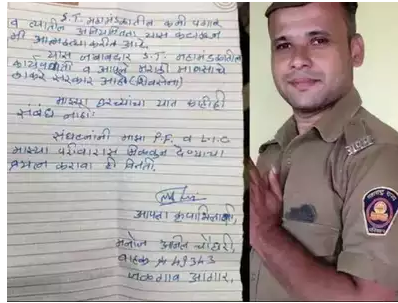 Ratnagiri Jalgaon ST Driver & Conductor committed Suicides, in their Dying Declaration they said “Thackeray Sarkar is responsible for their Atmahatya as they have not received Salaries” Whom Thackeray Sarkar will arrest Transport Minister? Chief Minister? for abetment 4 Suicide.

An MSRTC employee, who was in financial crisis, died by suicide at his residence in Jalgaon.

The incident came to fore on Monday morning. The man allegedly hanged himself to death at his residence in Jalgaon.
Manoj Anil Chowdhary (30), who was working at Jalgaon depot, has left behind a suicide note saying he took the drastic step due to low salary and irregularities in the ST Corporation

He said that the working methods of ST Corporation and Thackeray government (Shiv Sena) are responsible for the drastic step he took.

“My family has nothing to do with my suicide. ST organization should try to get my PF and LIC (money) to my family,” he urged in the suicide note. Following the incident, MIDC police rushed to the spot and took his body to the district hospital for autopsy. ST union office bearers also reached the district hospital.

Meanwhile, ST workers across the state have been staging agitation demanding payment of arrears for the last two months, arrears of October pay and arrears of dearness allowance. The MSRTC workers were working under extremely adverse conditions during the COVID-19 period. However, there is huge dissatisfaction among the workers as they are not getting paid for the work they have done.

On October 30, the Maharashtra State Road Transport Corporation (MSRTC) sought Rs 3,600 crore from the state government for payment of salaries and other essential expenses. The MSRTC needs Rs 292 crore per month for paying salaries.

(This story was first published in Maharashtra Times on November 9, 2020)