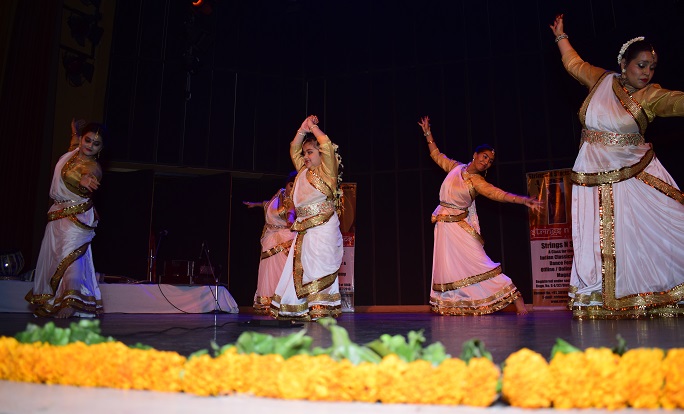 Next performance was ‘Strings N Steps – an amalgamation of Indian Classical Music & Dance’. A group of six Musicians along with two dancers captured and spell bound the audience. With a beautiful rendition of Hawaiian Guitar by Shri Neel Ranjan Mukherjee opened the performance. After a short spell of Aalap on Hawaiian Guitar Tabla & Pakhawaj joined Mukherjee with a very vibrant & energetic way and established the rhythm. By the time audience were enjoying the music along with a rhythmic cycle the Kathak Duo Sangeeta Majumder & Kumar Pradipto’s graceful appearance added grandeur and made it a power packed performance. The music ‘Shankar Girjapati Mahadev was composed by Neel Ranjan Mukherjee was truly supported and sang by Nalini Nigam, Tabla by Zuheb Khan, Pakhawaj by Bhanu Sisodia, Flute by Himanshu Dutt & Padhant by Mayukh Bhattacharyya. The group has multifold approach towards the traditional and as well as experimental side. The theme of the performance was Tandav&Lasya of Shiva-Parvati. The true epitome of beauty and grace presented by Sangeeta through her dance moves, said the Chief Guest Shri Athawale. Here we must appreciate the way they presented the concept , a Duet of Music and Dance is a unique of its kind where the musicians are not only accompanying rather equally performing with the dancers and established themselves as a pioneer of this genre of amalgamation of music & dance.

The concluding performance was the world renowned Hansa veena Maestro Pandit Barun Kumar pal with the legendary Tabla Maestro UstadAkram Khan. Panditji began his performance with Raag Basant. After a short Aalap & Jod he started with a very melodies Madhyalaya composition on Teen Taal followed by a Drut composition and Jhala in Ektaal. Panditjis rendition along with UstadAkram Khan created a heavenly atmosphere in the auditorium. Both the artists has shown their mystery and dedication towards their work was much appreciated. Event was compered by Ms.Radhika.