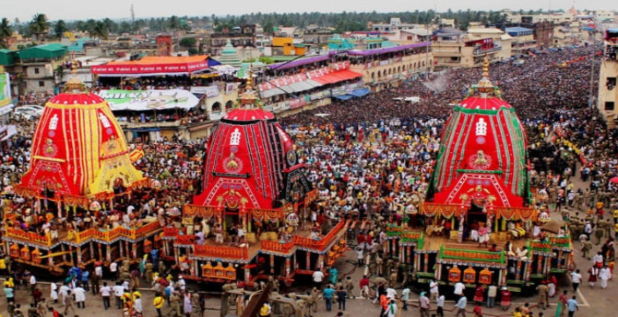 Reviewing its earlier order, the Supreme Court today left it to Odisha government and Jagannath Puri Temple Committee to hold this year’s Rath Yatra in the temple town.

On June 18, the apex court had stayed the Rath Yatra amidst increasing Covid cases in the state.

The court, however, said the state government can stop the yatra or the festivities if it feels that the covid situation is going out of hand.

Appearing for the central government, Solicitor General Tushar Mehta suggested that the yatra could be allowed with certain riders such as imposition of one-day curfew and rituals telecast live for the benefit of the devotees.

Senior Advocate Harish Salve, counsel for Odisha government, said all necessary steps would be taken to not allow public participation by imposing curfew.

The servitors and participating members would undergo Covid test and the chariot will be pulled by those who have tested negative, he said.

Intervening the submissions, CJI SA Bobde said the court would not take the responsibility of micro management of the yatra. “We will leave it to the best wisdom of the responsible state government,” he said.

In reply, Salve assured the bench comprising of CJI and Justices Dinesh Maheshwari and AS Bopanna, that the Odisha government will act responsibly and contain the spread. “If cases rise it will reflect badly on us. We will take care of it,” he said.

Appearing for a devotees’ organisation, Senior Advocate KV Viswanathan suggested that the yatra could be telecast live for devotees to have virtual darshan.

Senior Advocate PS Narasimha then pointed out that as per the rules of management of the Jagannath Temple, the state government has to coordinate with the Temple management committee.

Earlier today, the Centre had sought urgent hearing of its application seeking modification of the Supreme Court’s June 18 order through which this year’s Rath Yatra was stayed.

The Court had agreed to hear this plea today, given that the Yatra was scheduled to commence tomorrow.

The bench had stated, “The annual Rath Yatra this year is scheduled for June 23. The festivities usually go on for 20 days. Having regard to the danger and public safety of citizens, we direct State of Odisha to not conduct any Rath Yatra this year. There shall be no activity associated with the rath yatra during this period. Lord Jagannath will not forgive us if we allow it.”

The court was hearing a plea filed by a rights organisation, Odisha Vikas Parishad, which sought a stay on the possible celebration of yatra on June 23, in the backdrop of increasing COVID-19 cases.

Reacting to the verdict, Union Home Minister Amit Shah said he spoke to Puri King Gajapati Maharaj and his holiness Shankaracharya of Puri and sought their views on yatra.