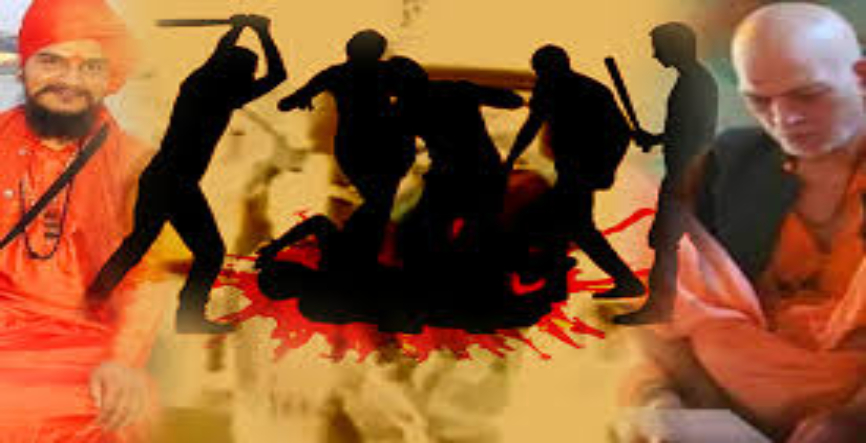 As you all know, the brutal lynching of Swami Kalpvriksha Giri, Sushil Giri and their driver in Palghar, Maharashtra.

Unfortunately, there has been a coordinated efforts to first suppress the facts, then dilute and now dismiss the incident by the police, media and Chief Minister Uddhav Thackeray. So, this seems to be a major coverup package, the eco-system wants to dish out to the people of the country.

Let us try to untie the coverup efforts of the eco-system.

The Assistant Police Inspector Anandrao Kale, in the complaint, states that he received a call and informed about the location where the crime is happening. On reaching the spot, Kale and his team, start to retrieve the three men trapped in the car, which was overturned by the mob.

After retreiving them, they were escorted towards the police vehicle. As they were moving towards the vehicle, the mob began pelting stones on them and their vehicles.

Whereas, in the video, a police personal is seen escorting Swami Kalpavriksha out of a building towards the police vehicle when the mob gets animated and starts raining lathis and rods upon the helpless monk.

The policeman is seen jerking the sadhu’s hands several times and leaving him at the mercy of the murderous crowd, ignoring his pleas for help.

So friends, there are many discrepancies between the complaint, the video evidence and commonsense, which raises several questions.

1) How did a mob of 400-500 assemble in such a short time in an area where the villages with a population of 100-150 are separated by a sizeable distance between them?

2) As section 144 order was already in effect, how can a mob this large assemble based on mere suspicion of the so-called theft? Where were the police patrols?

3) Why didn’t the police use crowd-control methods to better direct the situation?

4) Why didn’t police try and defuse the situation by use of force like lathi-charge or firing in the air?

6) As the complaint claims they were pelted by stones and were being thrashed by a mob then why didn’t the police retaliate with force?

The suspicious behavior of the media also raises several questions.

1) Who briefed the media with the story of suspected thieves being killed, when the police itself is still investigating?

2) What and who pushed media to act as the judge, the jury and the executioner and declare the sadhus as ‘thieves’?

3) Isn’t this an attempt to whitewash the crime?

4) Why did media deliberately omitted the fact that the two victims of this violence were sadhus?

5) Isn’t it a common practice in media that when an individual is attacked usually the heading reads of his identity as ‘Lawyer shot by unknown individuals’, then why act out of the norm now?

So, the coordinated stance of media indicates towards an unholy nexus of media houses and their manipulation of information.

Moreover, this incident happened on the eve of April 16, but for three days Uddhav Thackeray remained silent on it, but when he spoke, he furthered the lies of the media and also labelled citizens’ outrage as an attempt to communalise it.

This suspicious act of his, also has raised several questions.

1) Why is the Chief Minister interfering with the investigation by declaring the killings were results of suspicion?

2) Who is he protecting?

3) Why is he so desperate to further the narrative set by the media?

4) Why does the CM acts as if the incident is a PR crisis when in actuality it is a humanitarian crisis?

5) How can the CM claim that an outrage of citizens is an attempt to communalise or politicize the matter?

6) Why is the home ministers of Maharashtra are threatening the citizens with legal consequences if they speak their mind to demand justice for the victims?

Now that, we have unravelled the discrepancies between the comppaint, video evidence and commonsense, it is upto you to expose this eco-system to the core.