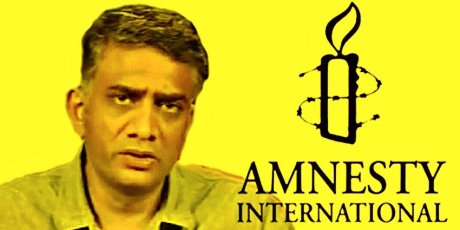 Thus wrote the shit-mouthed, “Donald Trump since becoming president has visited 20 countries of which the majority are in Europe. He has been to France four times. He dislikes the developing world and doesn’t want immigrants from what he calls shit-hole country, in which list he presumably includes India.”

If you still not believe a lallu-panju agency in your jargon, hook on to your favorite anti-India channels and watch what US President has to say about India and its prowess as an economy.

If you feel embarrassed to watch, let me reproduce what the President has to say.

Trump said incredibly, 12 Indian citizens, are lifted out of extreme poverty every single minute of every single day.

Aakar, this must have pricked your part of the body where the sun doesn’t shine when you sit on anything to relax!!!!

Listen to him more – Since the turn of the century, Trump said, India’s economy has grown more than six times in size and in a single decade India has lifted over 270 million people out of poverty.

He said India has become an economic giant.

He also said India is doing well and America is proud of India. “Prime Minister’s moving story is of an incredible rise and so does this entire nation, your nation is doing so well, we are very very proud of India. (Applause),” he said.

He also said the story of the Indian nation is a tale of astounding progress, a miraccle of democracy and extraordinary diversity and above all a strong and noble people.

Under Prime Minister Modi, for the first time time in history, every village in India has access to electricity, he said.

As many as 320 million people more Indians are connected to the internet and highway construction pace has more than doubled, Trump said.

Trump said India will soon be the home of the biggest middle class anywhere in the world and within less than 10 years extreme poverty in your country is projected to completlty disappear. (Applause)

The potetial for India is absolutely incredible, he said. “India’s rise as prosperous and independent nation is an example to every nation, all over the world, and one of the most outstanding achivements of our century,” he said.

And Aakar, what did you write in that smelly hole of a newspaper? You equated Modi and Trump as narcissists who hate Muslims, lying that Trump has banned travel of Muslims from certain countries and Modi excluded Muslims from CAA.

Why do a Gobbles, Mr Aakar? The US voters knew the lie and you feel, Indian voter will not know? The US voters dismissed your type clannish lies on Muslims, and it shall be done here too.

Trump said the economic growth is all the more inspiring because India has done it as a democratic and a peaceful country.

India has always been admired around the earth as the place where millions upon millions of Hindus, Muslims and Sikhs, Buddhists, Christians and Jews worship side by side in harmony, he said midst appluase.

“Where you speak more than 100 languages and come from more than two dozen states, yet you have always stood strong as one great Indian nation,” he said.

India’s unity is an inspiration to the world, he added.

In America, Trump said, he has come to know the splendor of Indian culture personnaly through the 4 million Indian Americans living in US as its wonderful friends, colleagues and neighbours.

“They are truely spectacular people,” he said.

Indian Americans enrich every aspect of US life and are titans of business, besides biggest and best pioneers of science, he said.

Moreover, masters of the art and innovation of technology, Trump said.

Aakar, let me tell you this – This is India, Bharat. If you try to dissect it, you would fail as the Mughals and other mighty rulers did. After all, you are not even the dirt of their shoes.

* Subscription payments are only supported on Mastercard and Visa Credit Cards.

For International members, send PayPal payment to [email protected] or click below

Will CJI Take Fake News Peddlers To The Cleaners?

Will CJI Take Fake News Peddlers To The Cleaners?