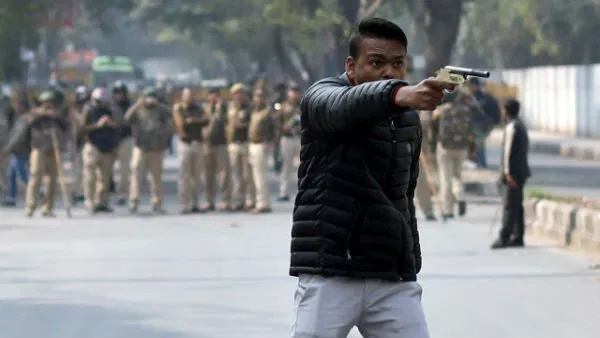 Unraveling The Conspiracy Behind Jamia Shooting

‘Rambhakt’ Gulshan shooting outside Jamia Millia Islamia University during the ongoing protests against the Citizenship Amendment Act in Delhi has given rise to a suspicion – whether it was stage-managed by Leftists to deny BJP an advantage in Delhi elections after being worried about the Islamist protest at Shaheen Bagh.

People are questioning the left-liberal cabal’s attempt to shield Islamists and defame right wingers by running “Hindu terrorism” narrative on a day, when Mahatma Gandhi was assassinated by Nathuram Godse, who has been painted by left-liberals as a saffron extremist.

Apart from this, people are also many other questions about the Jamia shooting, that needs to be answered.

Can Anybody In Police Custody Activate And Reactivate His FB Account?

This shows that his account was being handled by a third party to spread “Hate-Hindu” propaganda. Soon after the incident, the left-liberal cabal started to give colour to Hindutva extremism and link it to BJP minister Anurag Thakur’s “Desh ke gaddaron ko” chant.

Can A Rambhakt Like FB Pages Of Islamist Anti-Hindu Bhim Army?

The FB posts of Gulshan throws light on his likes and dislikes. He not only likes the pages of BJP leader Manoj Tiwari and Republic TV journalist Pratap Singh, but also likes Islamist Ajaz Khan and anti-Hindu basher and Bhim army chief Chandrashekhar Azad.

This is hard to believe. No right winger, publicly at least, would like the pages run by anti-Hindu rubble-rousers and Islamists. This smacks of doubts that Gulshan’s page was being handled probably by a leftist or AAP functionary.

Is AAP Behind Jamia Shooting Conspiracy?

This cannot be ruled out entirely because Delhi Chief Minister Arvind Kejriwal is very good at antics, which he had successfully done in the previous election campaigns.

Wooing Muslim votes has become vital for AAP and Congress, in the aftermath of Islamist protests against CAA, which has diluted their hopes of winning Delhi elections.

Therefore, it is very much possible for AAP to not only paint BJP, but also Congress black. In his old FB account, which resurfaced after his arrest, Gulshan is allegedly seen wearing a Congress scarf.

It absolutely impossible for a BJP or a right wing activist to wear a Congress scarf.

The timing of the posting of contents on Gulshan’s FB page, as well, has come under the scrutiny. Gulshan had created the account in July last, but started posting only after January 6, the day when Delhi elections were announced.

This only casts a shadow on AAP’s role in it as Amanathullah Khan, the party MLA, was active during anti-CAA protests and later arrested for delivering a hateful speech at Shaheen Bagh.

Was It Left’s Attempt To Recreate Godse-Gandhi Scene?

The coincidence of this shooting incident taking place on Martyrs Day cannot be ruled out. On this day, Godse had shot down Mahatma Gandhi.

Moreover, this incident, which took place a few days after Islamist Sharjeel Imam’s arrest, points towards a conspiracy.

The Shaheen Bagh mastermind was arrested for making seditious speeches. So, in order to wash his stigma off and put the monkey on Hindutva’s shoulders, the left-liberal cabal probably would have used Gulshan.

The answers to these questions would reveal the truth behind this incident. And, people of this country are waiting with keen interest, just as they did before the link between PFI and politicians, to run anti-CAA campaign was established.