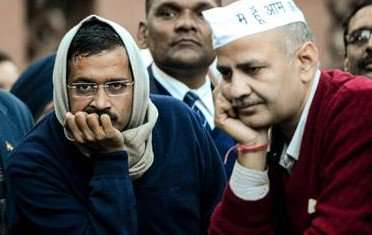 Why Kejriwal Is Scared, Despite Positive Exit Polls?

Has 31 per cent of votes registered in the last two hours of Delhi assembly polls already sounded the death-knell of Aam Aadmi Party?

Despite all the exit polls favoring AAP, Delhi Chief Minister Arvind Kejriwal is scared of defeat, and his left-liberal eco-system has already started to blame Bharatiya Janata Party for hacking EVMs.

This is the first time in India’s election history that a party, which has been given thumbs up by all exit polls, is complaining about EVMs even before the actual results have been declared.

Why is Kejriwal and his eco-system afraid? Let’s find out point-wise.

1) All exit poll numbers were assimilated till 3 pm. At that point of time, only 30.18 per cent polling had taken place.

3) As much as 31.5 per cent polling had taken place in the last two hours because these voters had reached polling booths between 4 pm to 6 pm.

4) In my earlier posts in FB and IndiaSpeaksDaily.com, I have been maintaining that AAP, neither had party workers on the ground, nor did manage any booth.

5) So, to which party did the voters, that turned out in last two hours voted for?

7) In Muslim areas too 70 per cent polling had taken place at the same period, but they were merely in 12 to 15 constituencies.

8) During last hours polling, the tables of AAP volunteers at polling booths were empty. On the other hand, BJP workers were bringing people in huge numbers to the polling booths to vote.

9) If exit polls are giving BJP 9-23 seats on the basis of 30.18 per cent voters turnout, then even 20 per cent of the last hours 31.5 per cent votes, will fetch the party enough seats to form government.

10) Kejriwal and his eco-system were hoping for Congress vote transfer for AAP in last hours, but it did not happen.

Kejriwal, Sanjay Singh, Manish Sisodia, Prashant Kishore and their entire eco-system have already started to blame EVMs due to the fear of losing. Therefore, they are crying hoarse on EVMs to save themselves.

It is becoming clearer and clearer that the left-liberal cabal and anti-nationals create an environment to devalue BJP’s victory through fraudulent exit polls to instigate unrest and hold protests against Election Commission of India.

Countrymen, don’t be surprised. The left-liberal cabal and the entire Lutyens media is going to rake up a ruckus on February 11. Wait and watch.