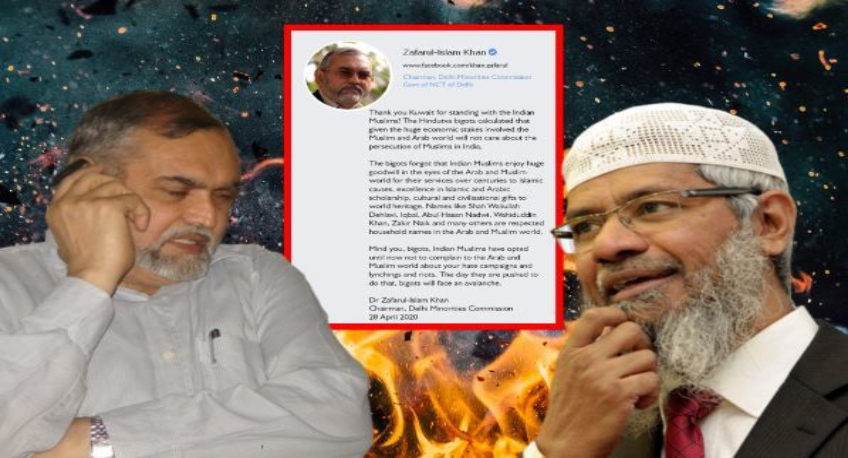 A day after Kuwait rejected attempts to spoil ties with India through ‘foreign sponsored’ social media handles and posts, Delhi Minorities Commission Chairman Zafarul Islam Khan stirred a hornets nest by calling Hindus as bigots, but overlooking the bigotry of so-called Muslim icons, which he mentioned in his Facebook post.

Khan wrote that the Indian Muslims enjoyed huge goodwill among Arab nations and warned ‘Hindutva bigots’ of an avalanche.

“Mind you, bigots, Indian Muslims have opted until now not to complain to the Arab and Muslim world about your hate campaigns and lynchings and riots. The day they are pushed to do that, bigots will face an avalanche,” he said.

His comment comes in the wake of several people in Kuwait taking to social media to express their anger after the Organisation of Islamic Cooperation (OIC) urged India to curb “Islamophobia” in India.

Last week, after the OIC had urged the Indian government to take “urgent steps” to protect the rights of its minority Muslim community. However, Kuwait joined Oman, Saudi Arabia and Qatar, to reject attempts to spoil ties with India through ‘foreign sponsored’ social media handles and posts.

In the post, Khan wrote, Indian Muslims enjoy huge goodwill in the eyes of the Arab and Muslim world for their services over centuries to Islamic causes, excellence in Islamic and Arabic scholarship, cultural and civilisational gifts to world heritage.

He also wrote, names like Shah Waliullah Dehlavi, Allama Iqbal, Abul Hasan Nadwi, Wahiduddin Khan, Zakir Naik and many others are respected household names in the Arab and Muslim world.

Related Article  A Top Star Wanted To Jail Me For Knowing About His Drug Overdose: Kangana

It is worth throwing light on the profiles of three names mentioned by Khan and understand how secular and respected were they in Muslim world.

In a letter to Aram, Iqbal said Tagore had travelled to Persia in order to develop Aryan affiliations between Hindus and Persians, and warned that it might lead Iranians to revert to Zoroastrianism.

This is the real persona of Iqbal, who was a bigoted and communal Islamist. This is reflected in the first stanza of Tarana-e-Milli, which was composed in the same metre and rhyme scheme as Sare Jahan Se Achchha. It reads: “Chin-o-Arab hamaara, Hindustan hamaara, Muslim hain hum, watan hain sara jahaan hamaara.”

Iqbal also was the first advocate of two-nation theory that ultimately led to the partition of India. His ultimate goal was to forge Ummah, a global Muslim community, by getting Muslim nations to rise above their political divisions.

He had also expressed deep fears of secularism weakening the spiritual foundations of Islam and Muslim society in his 1934 book titled “The Reconstruction Of Religious Thought In Islam”.

That he was bigoted and communal Islamist is evident from all these examples.

About Zakir Naik, none of the Muslim nations, including Saudi Arabia, accepted him, after India issued arrest warrant against him. His Peace TV channel is banned in Islamic state of Bangladesh.

Related Article  Will This Yogi Snatch The Thrones Of Others?

Though the fanatic preacher was given refuge in Malaysia, the police there have grilled him for 10 hours in 2019 for creating religious tension through his hate speeches. He is expected to be deported, but no Muslim country wants him. The hate preacher is like a nightmare for Malaysian people that refuses to go away.

About Waliullah, he had invited Ahmad Shah Abdali to invade India and wage Jihad against Hindus and Shia Muslims. The Afghan invader had carried out rape and massacres of Hindus in Mathura- and Vrindavan leaving heaps of dead children.

The hate post has received strong criticism from some sections of the society. BJP leader Syed Shahnawaz Hussain demanded an investigation against Khan for calling majority community as “Hindutva bigots”.

Online Magazine Swarajya Editor Jagannathan called Khan a traitor. “Anyone who appeals to a foreign power when you can seek redressal within the country is a traitor,” he tweeted.

Many twitteratis have urged Kejriwal to dismiss him from holding a constitutional post and booked under IPC Sections and Disaster Management Act.

Khan is the same person, who made Delhi Chief Minister Arvind Kejriwal oblige to his demand for omitting the use of “Tablighi Jamat” in Chinese virus bulletins.