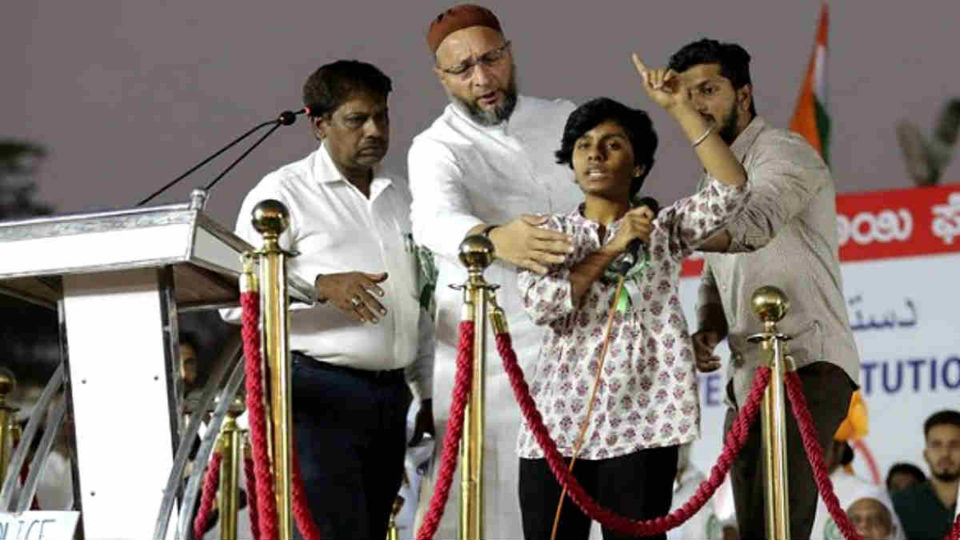 The Owaisi Lie On Amulya Controversy

The Hyderabad MP said his party did not endorse Amulya’s remark and added that the party has nothing to do with Pakistan.

Janab Owaisi sahab – why are you lying?

Delusion is all written into the DNA of your party.

The party, which was founded in 1927, was once headed by Qasim Razvi.

Janab, you pretty well know who the Razakars were? They were the dreaded Muslim militia which was set up to oppose Hyderabad’s merger with India. Yes, you heard it right. Your party wanted merger of Hyderabad with Pakistan.

Today, you are saying quite the opposite. Why? Are you afraid of telling the truth about the murderous chapter of your party’s history on your website?

The Razakars had carried out murderous attacks on Hindus, progressive Muslims and Communists, and fought against the Indian security forces in 1948. Undoubtedly, Razvi believed that the Muslims would once again become the rulers of India and the Nizam, the ruler in Delhi.

Being a scholor yourself, Janab Owaisi sahab, you must have read Mohammad Hyder’s book – October Coup – A Memoir of the Struggle for Hyderabad.

During a conversation with Razvi, Hyder had asked him a question whether it was justified for the Muslims, who were just 20 per cent of the population, to rule over the Hindus.

In reply, Razvi had said: “The Nizams have ruled Hyderabad for over two hundred years in unbroken line… The system must have some good in it if it has lasted two hundred years. Do you agree?… We Muslims rule because we are more fit to rule… We rule and they (hindus) own! It is a good arrangement and they know it!”

Hyder also observed that Razvi was not prepared to sacrifice the political reality of Hyderabad for the idea of India, because according to him, India was a geographic notion, not a political reality.

Owaisi sahab, which country did your party leader Razvi opt for, after he was released from Chanchalguda jail? Pakistan, you heard rightly.

In fact, he was released by Congress-led Jawaharlal Nehru government in 1957 on the condition that he would migrate to Pakistan. And he did, but not before, handing over the baton to Abdul Wahed Owaisi – your grandfather.

He was also jailed for ten months. You know for what? For attempting to rouse communal passions and creating or attempting to create panic, resentment or hatred in the minds of the Muslims against the state and the non-Muslims as disclosed by his speeches made by him in public meetings.

And, Janab – your brother Akbaruddin Owaisi threatens us with comments as these: “Remove the police for 15 minutes, we will finish off 100 crore Hindus.”

Was it possible then when Sardar Vallabhai Patel had launched Operation Polo?

Within five days, the army and militia of Hyderabad Nizam – Osman Ali Khan Asaf Jah VII – were brought down to their knees and annexed Hyderabad into India, in just five days.

Owaisi sahab – no one can forget this 2014 statement of yours. You had called upon Indian Muslims to join Pakistani forces in case India attacked the country.

Also, you once said that the Muslims are not tenants, but shareholders in India. Let us discuss about the Muslims later, but Owaisi sahab, your family undeniably is a tenant in India.

Let me remind you, your grandfather was given a 8.82 lakh square kilometer plot by India, which was surrounded by rivers and fertile land in Pakistan, but he did not go there.

Owaisi sahab, you can cheat people, and some half-baked journalists, but you cannot cheat your soul.