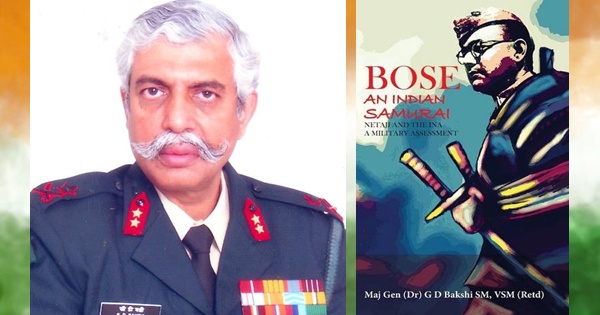 To quote Vinita Agrawal, a freelance writer and poet from Mumbai, who reviewed Gen Bakshi’s book, “Gen Bakshi puts into perspective how and why the British were finally ousted out of India…The Indian National Army, led by Subhash Chandra Bose, served to be the final nail in the coffin of the Raj. The war of independence described in the book proves at length, that it was the INA that won freedom for India.”

Here is an excerpt of an interview with Maj Gen Bakshi on his book on Netaji, taken by Manoshi Sinha, Editor of My India My Glory e-magazine.

1. Please throw some light about your book BOSE: AN INDIAN SAMURAI (A Military Assessment of Netaji and the INA).
My book evaluates Netaji Subhash Chandra Bose as a Military Leader and indeed, the First Supreme Commander of India. Netaji was instrumental in India getting her freedom. It is the first professional attempt to evaluate the military performance of the Indian National Army (INA) in World War-II and its significant impact on the Freedom Struggle.

Each and every engagement fought by the INA is described in detail in this book. The INA was the primary catalyst that inspired the military revolts of 1946 that ultimately forced the British to quit.

2. What prompted you to write a book on Netaji Subhash Chandra Bose?

Netaji is an icon of nationalism. Today we need to revive his intense spirit of patriotism. We also need to introduce his motivational methodology into our Armed forces. Hence this study of the combat effectiveness and role of the INA in our freedom.

3. How long did it take you to write BOSE: AN INDIAN SAMURAI (A Military Assessment of Netaji and the INA)?
Actually, I have been working on this for several years. I had started this study when I was in the Staff College in 1983. The major writing part was completed over the last two years. The rest of the time was spent in research and interaction with experts and people who participated besides meeting with their relatives.

4. Writing such a path breaking book on Netaji is no easy task. Was researching for this book a daunting task?
Most certainly! However, it was also a fascinating voyage of discovery. Bose lived a fascinating life of high adventure. His exploits border on the fantastic. Life proves to be much stranger than fiction. Most accounts on Netaji are focused on how he died. I have tried to focus on how gloriously he lived and how he is instrumental in India becoming free. He is a tremendous inspiration and till today an icon, who has most unfairly been denied his rightful place in History. India’s History of the Freedom Struggle needs to be drastically re-written.

5. It is for the first time that any author has examined the events of 1946 in detail. You have created history by describing the same in your book. Can you please tell us something about this?
The events of 1946, especially the revolts in the Royal Indian Navy and the British Indian Army, have been described in great detail in my book. I have cited British sources to prove that these revolts were primarily instrumental in forcing the British to leave in such a tearing hurry merely two years after they won the Second World War. These revolts were inspired primarily by the INA trials.

6. Your book on Netaji seeks to reopen a significant historical debate about how India got her freedom. Your book claims it was Netaji, not Gandhi, who got India freedom. Please enlighten on this.
A succession of court historians have tried to craft a narrative that India had obtained her freedom entirely by the soft power of ahimsa (non-violence) and Satyagraha; and that hard power had no role to play whatsoever. This is a huge sacrilege. As per the INA’s official history, the force had a total strength of 60,000. Of these, 26,000 were killed in action. Was that non-violence?

The pity is that the Nehruvian dispensation treated these men as traitors. There is no memorial for the 26,000 martyrs. The INA veterans were not taken back into the Army (on Mountbatten’s advice) and denied their war time pensions. Any nation that seeks to gloss over the martyrdom of 26,000 of its soldiers erodes the very basis of its nationhood.

The problem arose from the Nehruvian dispensation’s quest for political legitimacy. It claimed that its non-violent struggle alone had liberated India from the colonial yoke and as such, that gave it the right to rule. This was a deliberate distortion of History to downplay the role of violence and completely bury the role of Bose and the INA. In denying this obvious legacy of force and violence, the Nehruvian dispensation went to inordinate lengths to underline the relevance of its ideology of pacifism and non-violence.

8. Any available sources that we can rely on to unearth the truth about what finally happened to Bose?
To get at the whole truth, we need access to Russian, Japanese and British archives. I have analyzed a wealth of data, which provides some most disconcerting and horrible speculations about what happened to the man who, in truth, got us our freedom.

9. Your message to readers through your book.
Today, India as a nation needs to squarely face up to the truth about Netaji. Bose was the icon of Indian nationalism. Today, we need to revive his legacy in the backdrop of an ugly debate that seeks to splinter the nation state in India under the pretext of free speech. Treason and treachery continue to flourish in India. That is why we need to revive the ardent nationalism of Bose – an Indian Samurai par excellence.

To further quote Vinita Agrawal – “Gen Bakshi upholds Bose as the icon of Indian nationalism and makes a fervent plea to invoke his real role and undeniable stature in India’s struggle for freedom. The book is his personal tribute to one of the greatest Indians of the last century. It is a strong voice against forces that have sought to wipe out the legacy of Bose, censor his contribution and sideline the importance of the work he did for the country’s freedom. The author refers to him with pride as India’s ‘scholar warrior par excellence’, ‘India’s first supreme commander ‘ and a ‘Prince among Patriots’ – in other words – ‘an Indian Samurai’”.

A prolific writer, Maj Gen Bakshi is the author of 35 books on topics ranging from military to non-military. He has contributed over 200 papers in numerous prestigious research journals and national newspapers. Commissioned in the Jammu and Kashmir Rifles, Maj Gen (Dr) GD Bakshi was proficiently involved in numerous skirmishes on the Line of Control. He was a veteran in handling counter-terrorist operations in Jammu and Kashmir and Punjab. He was honored with the Vishisht Seva Medal for commanding a battalion in operations in Kargil and the Sena Medal for operations in Kishtwar. Maj Gen (Dr) Gagandeep Bakshi served two tenures at the Directorate General of Military Operations. He was the first BGS (IW) at HQ Northern Command (India), where he dealt with Information Warfare and Psychological Ops. He appears regularly on TV talk-shows as a military analyst. He is the editor of the Indian Military Review.