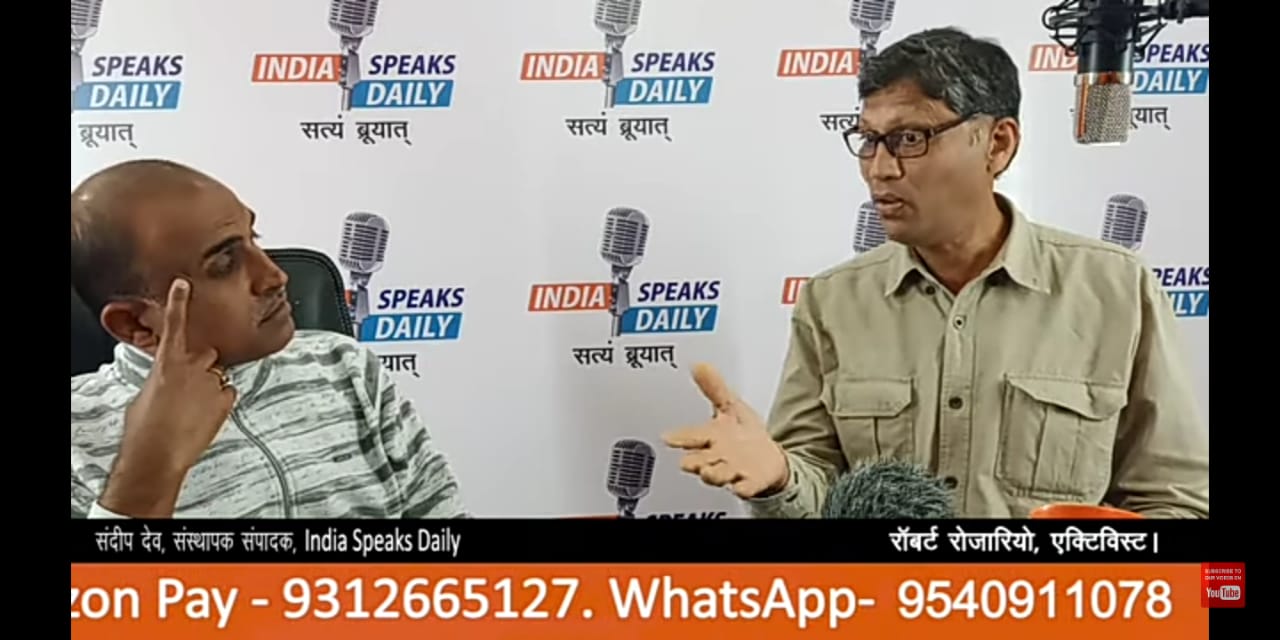 Indian Church Is Against Its Own People: Activist Robert Rosario On CAA

Excerpts from the interview:

Sandeep Deo: The Narendra Modi government has brought in Citizenship Amemdment Act to grant citizenship to the persecuted minorities of Islamic states – Pakistan, Bangladesh and Afghanistan – bordering India. What you think about it, considering the protests going on in few parts of the country?

Robert Rosario: Our fellow Christians were being persecuted in our neighboring countries, particularly in Pakistan. We were helpless. We could not rescue them, but we could only pray for their well being. I feel CAA is the most humanitarian legislation passed by our Parliament.

Instead of honoring Prime Minister Narendra Modi for this, the Church is needlessly creating a controversy. It is very sad that the Church in India are looking the other way instead of sharing the joy of the persecuted Pakistani Christians.

This exposes their narrow mindset and hidden agenda. They have once again proved that they are not concerned about the well being of the community, but are here to further their agenda.

Sandeep Deo: Why is the Church opposing CAA?

The Church was unhappy with a bill introduced by Jan Sangh MP OP Tyagi in Parliament that would have banned the use of force or inducement to bring about conversions from one faith to another.

The Church had mobilised the Christian community and staged protests in Delhi, Bombay, Cochin and other state capitals.

In fact, then Morarji Desai led Janata Party had brought the bill with an aim to prevent the exploitation of tribals and untouchables.

The Church also opposed Mulaym Singh Yadav and Lalu Prasad Yadav’s governments when VP Singh’s government was at the centre, complaining against the treatment of nuns in their respective states.

So, this is the mindset of the Church against non-Congress government. So, it is not surprising that it opposed CAA, regardless of its benefits to its own persecuted community.

In fact, Cardinal Oswald Gracias is the head of the Church in India, Pakistan and Bangladesh, and he should have welcomed the legislation benefiting the persecuted Christians in the bordering Islamic states.

Sadly, he opposed it by saying religion should not be the criterion for citizenship of a country. This amounts to the Church being least bothered about the welfare of its community, under his church jurisdiction.

Unfortunately, the Church in India also are mute spectators to many of the ill-conceived policies of the Congress. For instance, it did not mince any words against the erstwhile Siddaramaiah-led Congress government in Karnataka when it celebrated Tipu Jayanti.

Tipu, actually, had massacred the Christians in parts of Karnataka and Kerala. The Mysore tyrant ruler, in February 1784, had destroyed the Milagres Church in Mangalore, built in 1680.

Tipu had also imprisoned 60,000 Catholics, suspected of being British spies. So, there is a widespread dislike for Tipu among Catholics in southern India.

Sandeep Deo: Doesn’t the Church knows that the legislation is nothing to do with Muslims?

Robert Rosario: Yes, it knows, but is purposely supporting the People’s Liberation Front and other anti-India organisation protesting against CAA. They tell the congregation that, it is the mindset of the Hindus, who would first keep he Muslims out and later Christians.

Sandeep Deo: Is the Church still getting foreign funds, especially after the tightening of Foreign Contribution Regulation Act (FCRA), which stipulates NGOs receiving foreign funds to inform the home ministry if there is any change in officebearers of the NGO?

Robert Rosario: There is no need for the Church to get funds from foreign sources. It has lot of money running in thousands of crores of rupees. The source of income is its assets. The Catholic Church owns the largest portion of India’s non-agricultural land in India after the government.

It also gets income from various institutions running across the country. And, the Christian community do not have any rights to ask about the money transactions of the church due to some laws. Even the government cannot question, because it does not have any legal authority to control the Church, like it controls Hindu temples.

Therefore, we cannot question the Church even if the money is used for anti-India activities. There are allegations against fanatic Christians, who along with Maoist groups had killed Swami Lakshmanananda Saraswati in Kandhamal in 2008, who was fighting against conversion of tribal people.