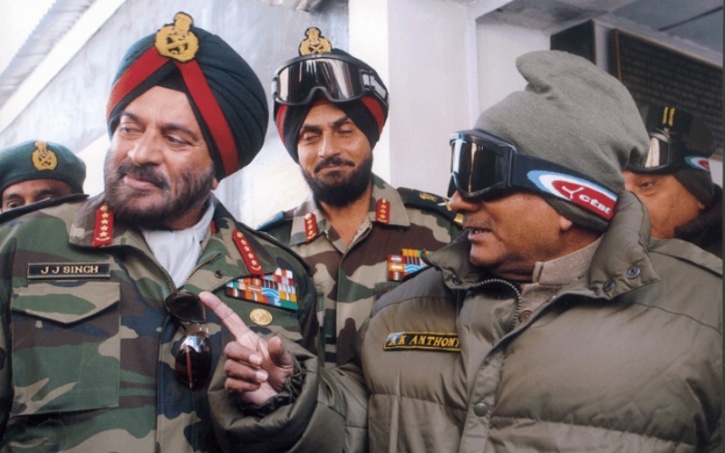 The Unrealistic Blurt Of General Panag Over India-China Border Tensions

Former AICC President Rahul Gandhi shared a Lieutenant General (Retd) H S Panag’s article on Twitter. He wrote: “All patriots should read the article of General Panag. Denial is not a solution.”

In his article, General Panag claimed that China will have an upper hand in the June 6 talks as it has infiltrated about 40 to 60 square km of land in three different areas of East Ladakh. If India does not agree with the terms, China can also wage a limited war.

General Panag also expressed apprehension that since China owns India’s land, it may put a tough condition like stopping the construction along the Line of Actual Control (LAC) to resolve the dispute.

He wrote, “If diplomacy fails, then China is ready to escalate a border conflict or even fight a limited war.” He further said India should tie the knot that it does not have to bow to the arbitrariness of China, even if India does not have to fight a war imposed by China.

So, General Panag is clearly giving China the upper hand and portraying that the Dragon country enjoys the liberty of leaping into arbitrariness. But, in reality China’s situation is quite the opposite. It is facing the heat from several European countries and America, for its callous handling of Coronavirus outbreak.

Trump and his top officials – Vice President Mike Pence and Secretary of State Mike Pompeo – have squarely blamed China for the global health emergency. He blamed Chinese authorities for the spread of Coronavirus.

Many American and European companies have decided to withdraw from China and invest elsewhere, especially in India. Economically too, China has been battered because of the trust-deficit in their supply chain.

In these circumstances, it is difficult for China to wage limited war against India, because it has been totally alienated by America, which boasts of the most powerful military prowess in the world.

In the event of war against India, Trump and other countries including Japan and Taiwan, who are having sea water disputes with China, would come to India’s help.

In fact, Trump had offered to mediate between India and China over the ongoing border dispute in Ladakh, sending a diplomatic message that India is capable of facing China on its own.

General Panag could have considered geo-political and geo-strategic factors weighing against China in his article, which could have sounded more realistic. Probably, the Retired General chose to be unrealistic, for he endorses leftist-leanings of Aam Aadmi Party. In fact, he had joined the party ahead of 2014 Lok Sabha election.

General Panag is the same person who had endorsed a call for a military coup against the democratically elected government should Prime Minister Modi return to power in 2019. He, however, deleted his tweet later and claimed he actually meant political revolution.

Seven years earlier too, he had endorsed a dubious Indian Express story that claimed a possible coup attempt by the Indian Military under the command of General V K Singh. He had hinted that the troop movements were a pre-emptive attempt to stop the then UPA government from sacking him through his tweets.

Not only this, General Panag also cast aspersions on V K Singh’s character, who is now a minister in BJP-led NDA government.

General Panag also had shared misleading images of the coffins to insinuate that the government and the army deliberately disrespected the mortal remains of the crew of Indian Air Force chopper which had crashed in the harsh terrain of Arunachal Pradesh in 2017.

One could have also appreciated General Panag for admitting China’s occupation of 640 sq km of Indian territory in Eastern Ladakh during the second term of the UPA regime under Prime Minister Manmohan Singh.

The land grab in 2013 by PLA happened after India had signed nine agreements, including the Border Defence Cooperation Agreement (BDCA), the same year in March ahead of Chinese Premier Li Keqiang’s visit to India.

China, though, undermined the agreement when it led an incursion in Depsang area of Ladakh in April. The standoff at Doklam and now at Eastern Ladakh frontier, the sanctity of BDCA has been left in tatters. In fact, the BDCA has remained ineffective in checking Chinese incursions in Ladakh.

So, it is not a surprise that Rahul Gandhi, trusts people like General Panag, who question Indian armed forces over Balakot surgical strikes and criticises Prime Minister Modi for anything he does.

Rahul Gandhi. Time to grow up?

Adani Group answers all 88 questions raised by Hindenburg Research; including age of its auditors