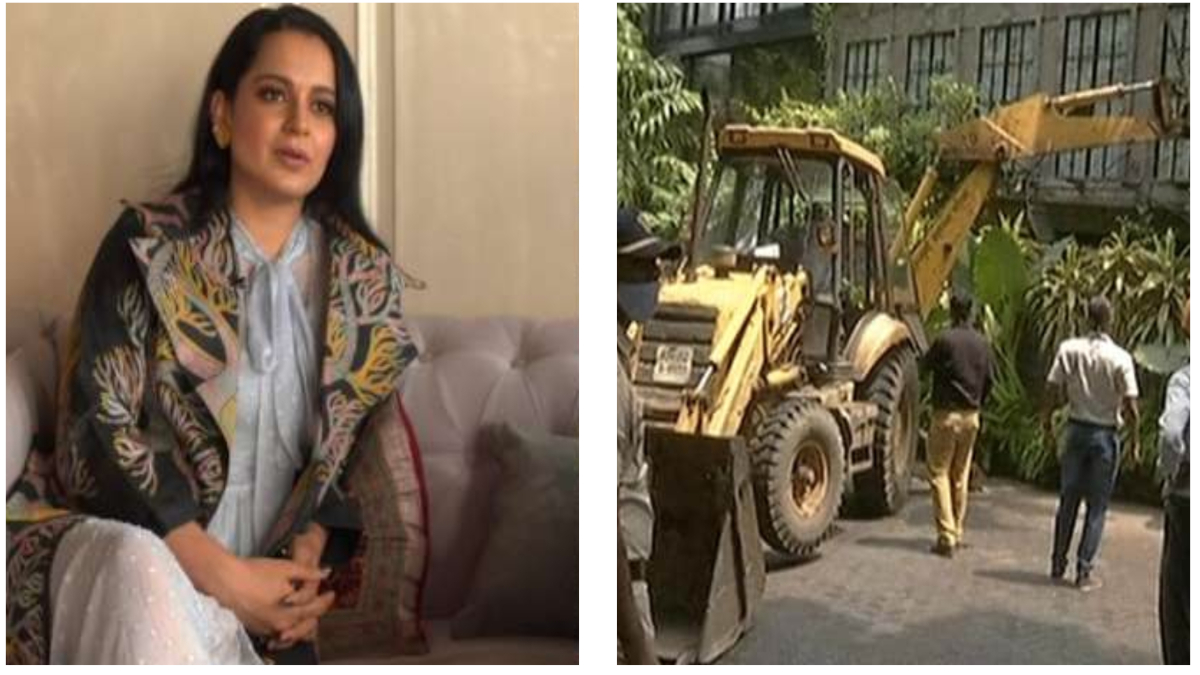 The Shiv Sena-controlled Brihanmumbai Municipal Corporation demolished a portion of office of actor Kangana Ranaut even as Bombay High Court was scheduled to hear her plea against the demolition drive.

This clearly is a contempt of court case. And, Kangana has proved it right by calling Mumbai a PoK, for which a Shiv Sena MLA threatened to slap her when she arrives at Mumbai airport.

The women protestors belonging to Shiv Sena hit her posters with slippers and Sanjay Raut called Kangana “haram khor ladki”. Even Chief Minister Uddhav Thackeray took a dig at her, saying that people who earned their livelihood in the city were ungrateful.

Maharashtra Home Minister Anil Deshmukh too ordered an investigation into the allegations of an actor, Adhyayan Suman, that she “took drugs”.

While all this happened, there was a pin drop silence by the Lutyens media and its Bollywood allies. No cry for “Smash The Patriarchy” for her.

For these hypocritic brigade Shiv Sena was an untouchable party until it was an allied partner of BJP. The moment they joined hands with NCP and Sonia’s party, they gave clean chit to Shiv Sena and also started to paint his government in bright colors, though Maharashtra churns out the highest number of coronavirus positive cases.

This is the same brigade which did not raise the “smash the patriarchy” pitch when Union Minister Smriti Irani was abused by opposition parties and politicians, on a number of occasions. It is the same group when Samajwadi Party’s Azam Khan recited a sexist poem in the Lok Sabha to BJP MP Rama Devi.

Related Article  What Does Modi's Visit To Ayodhya Means To Hindus?

Their hypocrisy in Sushant’s case also stands brutally exposed. They have stood for prime accused Rhea Chakraborty from day one.

The reasons for this gang to launch a campaign against Sushant and his family is not far to fetch. It is simple. They are worried of those Bollywood names cropping up in the public domain, who are connected to Sonia Sena, which is a part of dibbly-dobbly three-wheeled Maharashtra Vikas Aghadi government.

These leeches are worried about the imminent fall of Sonia Gandhi-backed Maharashtra government the moment some big names in Bollywood and Mumbai, if they are summoned by the Narcotics Control Bureau to take forward the drug angle enquiries in Sushant’s death case.

Moreover, these pro-criminal brigade, from the very beginning knew which side they have to take, in view of the ensuing Bihar elections. Sushant’s family is from Bihar, where BJP is in power and it cast aspersions on Mumbai police for their attempts to derail the probe before registering a FIR against Rhea for abetment of suicide case.

Meanwhile, Rhea has made some sensational disclosures during the magistrate hearing to her bail plea. She said 88 per cent of Bollywood celebrities take drugs.

Replying to a query asked by the magistrate, Rhea said she wasn’t pressurized by any central agencies to reveal the names of top Bollywood celebrities, who do drugs and are linked to drug cartel.

Without going into the details and revelations that are out in the public domain, Rajdeep Sardesai and Company slanderously labelled Sushant as a drug addict. The family should not spare them for kicking up a slanderous narrative.

Related Article  The Syndicate Behind Disbandment Of Army's TSD

This brigade, to put it in Sanjay Raut’s words, is quite naughty. Period.