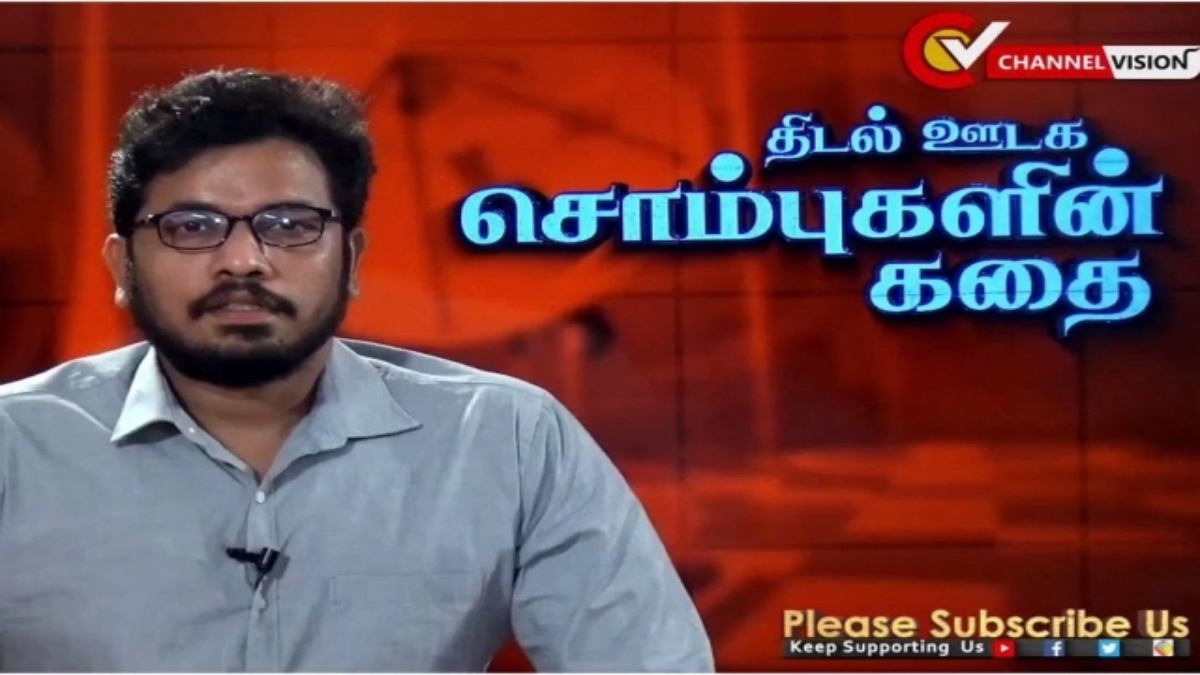 Puthiyathalaimurai, News 7, News 18 Tamil Nadu, are some of the mainstream media channels in Tamil Nadu.
These channels are accused of being favourable to Dravidar Kazhagam, Dravida Munnetra Kazhagam and Communists.

Now, they are facing backlash from Vloggers – Madan Ravichandran of Channel Vision and Maridhas. They have provided disturbing details about communist and DMK’s operating model in their videos that have gone viral.

Maridhas, on July 5, had released a video, exposing the nexus between journalists at News 18 Tamil Nadu, DK, DMK and Communists.

He also exposed the Centre of Media Persons for Change that acts as a nodal point for the infiltration of communists, DK groups into the media.

The persons associated with this centre trace their history to One Mind Generation Research run by MK Stalin’s family and his associates.

In a very short time, he had earned an excellent reputation for posing probing questions to personalities across the ideological and political spectrum.

In the latest video, Madan Ravichandran narrates about the problems he faced, from his recruitment to how he ended up doing Vlogging.

He says he was very much interested in pursuing a career in journalism. So, he undertook a 3-month journalism course.

He started applying for a sub-editor and anchor’s job in reputed Tamil news channels. He could pass the tests, but not the interview round. Because, the interviewers tested his ideological and political affiliations by asking who was his favourite leader.

So, when he was asked this question, he answered “Netaji Subash Chandra Bose” in one interview and V Prabhakaran in another. Both times, he was rejected.

As he was desperate to have a job under his belt, Ravichandran hit upon an idea. He bought a T-shirt with Periyar’s photo and showed up at events attended by journalists. This created an impression that he was Periyar’s follower. Finally he got a job in a news channel.

Upon entering, he was amazed to find out that many who worked in the channel had links with DMK or its affiliates. One of them was a DMK MLA’s sister’s son. Sometimes, persons belonging to the editor’s caste were hired.

Ravichandran rose to fame after his interview with Dravida Kazhagam President K Veeramani. Veeramani had walked out after facing tough questions. Since then, he was identified as a “Sanghi”. Thereafter, he faced a lot of hurdles at his workplace. He was discriminated against by journalists.

However, the discrimination stopped for a brief period after he had posed some probing questions to Chanakyaa CEO Rangaraj Pandey, who the DMK cabal identifes him as a Sanghi.

His religious sentiments also were hurt. Once he turned up at the office with sacred ash on his forehead on Thaipoosam day, he was greeted with a derogatory joke. He brushed this aside, considering that they were atheist.

Not enjoying his job, Ravichandran joined another channel, where during the interview, he was asked what his caste was.

The editor told him not to venture into any revolution but dance to the tunes of the one party and their affiliates.

He faced frequent interventions from his boss. Some portions of his videos, depicting DMK and its affiliates in bad light, were edited. He asked if they are journalists or party men in disguise.

After some time, as a punishment, he was asked to cover the cinema. Even then, he was told not to take up lyricist Vairamuthu’s of #MeToo fame who had sexually harassed singer Chinmayi Sripada.

Not happy, Ravichandran changed his job yet again. The owners of the channel promised full freedom to him. However, Jen Ram, the Editor-in-Chief, cut his wings by restricting him only to YouTube.

But, Ravichandran did not give in. In one of the interviews with Aloor Sha Navas, the Deputy General Secretary of Viduthalai Chiruthaigal Katchi, was very much upset with him for asking tough questions. After the interview, Navas called the Editor-in-Chief and lashed out at Madan saying, how dare that Sanghi fellow ask him such questions.

After this, Ravichandran’s questions were vetted before the interview. Sometimes, he did not allow interviews. He did not allow his interview with DMK MLA and DK ideologue Suba Veerapandian. He was very excited to interview Suba for his depth of knowledge and conduct.

He, however, succeeded in getting the interview after approaching WIN News’s owner, Devanathan. The interview became a huge hit on YouTube. However, Ram’s lobby at WIN News protested against Ravichandran by wearing black ribbons for his interview with Suba.

Suba Vee had even posted in his Facebook handle that Madan had asked the right questions, but that it was Suba who lost to him.

Ravichandran was also branded as Tamil Nationalist for having V Prabhakaran’s photo on Maaveerar Day. Later, he was shunted out of the channel, citing he won’t be able to mingle as they were going in a different direction.

In yet another occasion, he was blasted by the editor of a channel for inviting Naam Tamilar Katchi’s (NTK) Kaliammal for a debate in his show. The editor had lashed at Ravichandran saying, he was not running the channel for promoting NTK.

Working for another channel, Ravichandran was asked by the editor to sensationalise Pollachi murder and rape case to trigger a protest like the Jallikattu protests. The editors’ lobby in Tamil Nadu had decided to hype the issue to create a favourable atmosphere for DMK.

He ends by saying that he will continue to keep exposing the Tamil news channels and their hidden secrets.(

(Inputs from Swarajya and The Commune Mags)